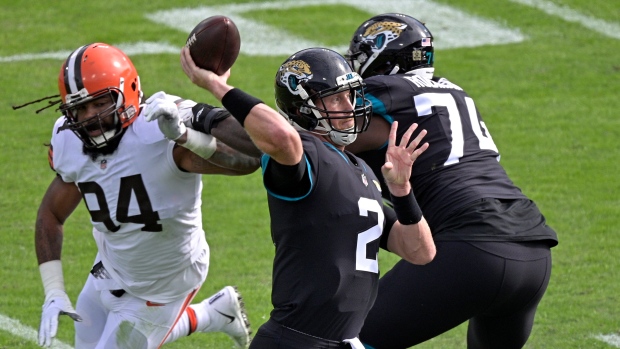 JACKSONVILLE, Fla. — Quarterback Mike Glennon is getting another start for the Jacksonville Jaguars even though Gardner Minshew is fully healthy.

Coach Doug Marrone said Wednesday he’s sticking with Glennon at Minnesota (5-6) on Sunday. He added that Minshew has been cleared to practice in full after recovering from a sprained thumb on his throwing hand, an indication Marrone and his staff have given up on the 2019 sixth-round draft pick who was a rookie sensation.

It probably helped that Glennon was solid in his first start since Week 4 of the 2017 season. He completed 20 of 35 passes for 235 yards and two touchdowns in a 27-25 loss to Cleveland last week. His best throws went for scores, a 46-yarder to Collin Johnson and a 2-yard strike in tight coverage to Tyler Eifert.

Glennon didn’t have a turnover — the first time since the season opener Jacksonville played a clean game — and wasn’t sacked.

The Jaguars (1-10) have lost 10 in a row, the longest single-season skid in franchise history. Owner Shad Khan fired general manager Dave Caldwell following the latest loss and said he is keeping Marrone and his staff in place through the end of the season.

The new GM is expected to decide Marrone’s fate. It would be stunning to see Marrone back in 2021.

Marrone made it clear earlier this week how he plans to approach the team’s final five games — a precarious spot given the team's need for a high draft pick to land a potential franchise quarterback.