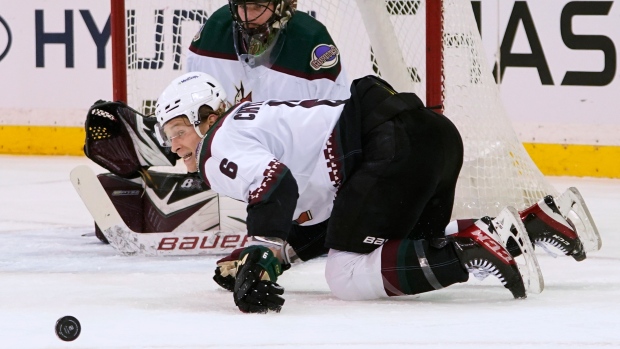 The Jakob Chychrun sweepstakes appear to be heating up.

TSN Hockey Insider Darren Dreger points to the Toronto Maple Leafs among many teams to 'kick tires' on the Arizona Coyotes defenceman but adds that at least five teams have "strong interest" in the 23-year-old.

"Well look, Arizona Coyotes’ defenceman Jakob Chychrun has term left on his contract and I can tell you, the Toronto Maple Leafs are among many teams who have at least kicked tires on Chychrun, but you look at the Toronto Maple Leafs’ roster, how they move forward, it seems like a tough fit for the Maple Leafs to try and manoeuvre unless Kyle Dubas gets extraordinarily creative," Dreger said on Insider Trading.

"Now, sources say that the list of teams with strong interest in Chychrun includes L.A., Florida, Boston, Anaheim and the St. Louis Blues. Now, Bill Armstrong obviously has time on his side, so he is going to let this marinate a little bit more, unless he gets the four components that are needed."

Chychrun has three seasons remaining on his contract at a cap hit of $4.6 million on the six-year deal he signed with the Coyotes in 2018. He has two goals and eight points this season while averaging a team-high 24:14 of ice time per game.