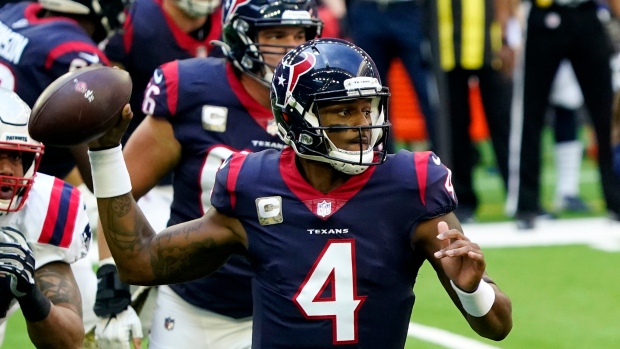 While all indications coming from the Houston Texans this offseason suggest that the club is not prepared to accede to Deshaun Watson's trade request, the three-time Pro Bowler is still "extremely serious" about leaving.

"I highly doubt [DeShaun Watson] will suit up in a Texans' uniform again. He's extremely serious." Rams CB @jalenramsey on the Huddle and Flow podcast w/@JimTrotter_NFL @tewarren and me.

"He's extremely serious," Ramsey said. "At the end of the day, Deshaun is a great man...even now as people are trying to crucify him and talk bad on his name, he's still out there doing things for the community in Houston. So he's a great man. He's a professional. He's still going to do things that are positive around the community and probably help his teammates out, because they're still his teammates...but I highly doubt he'll ever suit up in a Texans uniform again."

News emerged in late January that the 25-year-old Watson had asked for a trade from the team he's spent the entirety of his four-year pro career. The Clemson product signed a four-year, $156 million extension with the team in January.

Only days later, the team's new general manager Nick Caserio told a press conference that the team had "zero interest" in moving Watson.

Last week, the NFL Network's Tom Pelissero reported that the Texans remain unwilling to engage with other clubs in regards to any potential trade for the player.