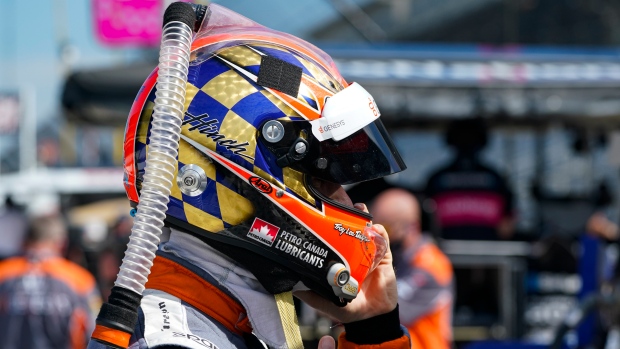 INDIANAPOLIS — Dalton Kellett's debut at the Indianapolis 500 won't quite be like he pictured it growing up. It won't be in May, it won't be in front of hundreds of thousands of fans, and many of the other rituals associated with the race will be altered due to the COVID-19 pandemic.

But Kellett still got to take in one of the traditions.

"One cool thing that they did do is every year they rename the streets downtown with the drivers' last names," said Kellet. "So there's a street called Kellett Avenue in downtown Indianapolis right now. I went down and took a picture of that the other day."

The 26-year-old noted that most of the race's traditions revolve around spectators and fan interaction, which he said he considers a real loss for this year's Indy 500. However, he's still looking forward to the pre-race process should he qualify for the race on Saturday.

"Lining up the cars on the front straightaway, 11 rows of three, the pageantry, the history behind the race, it's what makes you realize how big an event it is," said Kellett.

Kellett, from Stouffville, Ont., is in the midst of his rookie IndyCar season, albeit one that has been shortened and re-arranged by the COVID-19 pandemic. He's competed in three races so far this season, the GMR Grand Prix (21st) and Road America (20th in both races).

"I think given the lack of track time and testing I'm content with what we've done so far," said Kellett. "Obviously, we want to be competing a little bit further up the course on the road course but I think that will just be a process of learning and getting up to speed with everything.

"Coming into today with the extra boost there were a lot of unknowns, but it was awesome to get out there and start knocking out 230’s from the first run," said Hinchcliffe, whose time was 38.7987 seconds. "We ran through our program , and I think we made some good progress."

"Just finished up my first Fast Friday. I feel like I can finally breathe now. It was a long day of qualifying runs," said Kellett. "I think we’ve got a good compromise between outright speed and also just having the car for the entire four laps."

Qualifying will be on Saturday with the race itself on Aug. 23. Should he qualify to race, it will be a dream come true for Kellett, whose favourite Indy 500 moment was when Jacques Villeneuve of Saint-Jean-sur-Richelieu, Que., won in 1995.

"It would be the biggest race of my career and the culmination of a lot of years of hard work coming through the junior ranks," Kellett said. "It would be a big moment. I can't emphasize enough how exciting it would be to be in the field of 33 and represent Canada and represent A.J. Foyt racing."

This report by The Canadian Press was first published August 13, 2020.

By John Chidley-Hill in Toronto

Note to readers: This is a corrected version of an earlier story. The Indianapolis 500 race is on Aug. 23, not this Sunday.