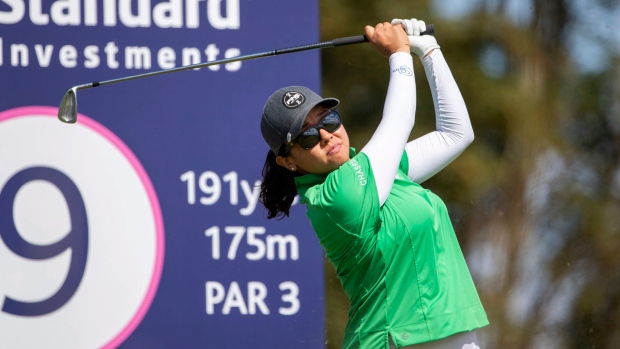 NORTH BERWICK, Scotland — Jane Park, Anne van Dam and Mi Hyang Lee took advantage of calm conditions in the opening round of the Ladies Scottish Open on Thursday, shooting 8-under 63s to share the lead.

Lee won the Ladies Scottish Open two years ago at Dundonald. The veteran Park and the rookie van Dam are seeking their first LPGA Tour victories.

Moriya Jutanugarn was one shot back on a sunny day of low scoring at The Renaissance Club, a resort links next to Muirfield on Scotland's East coast. Players were bracing for wind and rain on Friday.

"When I see the forecast, today is like best day and then tomorrow is worst day," Lee said. "So my plan, my kind of plan was I try to make a lot of birdies."

Van Dam, a long-hitting Dutch player known for viral videos of her swing, hit a 5-iron to 4 feet for eagle on the par-5 first hole and 6-iron to 3 feet for another eagle on the par-5 12th. She wasn't pleased that tees were moved up on several holes, including those where she took full advantage.

"It's just disappointing, on a day like today, the weather was just perfect. I saw no need to do that," van Dam said. "You're talking to the best players in the world in the females' game. I don't think we need any short courses, not at all. If it's a day like tomorrow, when it rains a lot, fine."

Van Dam is seeking to lock up her spot on Europe's Solheim Cup team along with ensuring full LPGA Tour playing privileges next season.

"I'm just looking forward to playing a solid week of golf," she said. "Whatever happens at the end of the week, I can't control that."

Defending champion Ariya Jutanugarn, winless since last year's triumph at Gullane, opened with a 69, as did Hamilton's Alena Sharp.

Park dedicated her round to her husband, Pete Godfrey, who caddies for Ariya Jutanugarn and celebrated his birthday on Thursday.

"I think he's going to ditch me and go play North Berwick," Park said about her husband's birthday plans. "So that means I've got a day to myself. We might go to dinner later, but yeah, he's going to play golf."

Numerous top players are skipping the event after back-to-back majors in Europe, including the winners of those championships, top-ranked Jin Young Ko (Evian Championship) and Hinako Shibuno (Women's British Open).