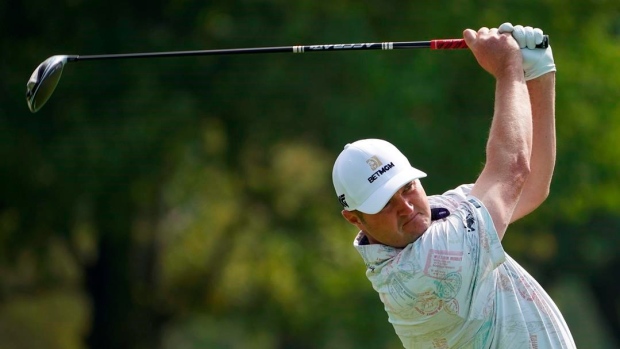 The wind was up at Winged Foot, the greens harder, the rough still gnarly.

Jason Kokrak negotiated it all after a shaky start and now finds himself in contention at a major championship.

Shaking off three early bogeys, the big-hitting PGA Tour veteran had three birdies over his final five holes to shoot a 1-over 71 on Friday in the second round of the U.S. Open.

Kokrak heads into Saturday's third round at 1 under, three shots off the lead held by Patrick Reed.

“Any time you’re under par at an open, you’re doing really well,” Kokrak said. “Didn’t get off to a particularly good start, 3 over through 4 or 5 or whatever, but just didn’t hit the driver as well today. Managed my game pretty well, hit it a little bit better on the back side."

Causal golf fans will know some of the names near the top of the leaderboard, like Reed, Bryan DeChambeau, Justin Thomas, Xander Schauffele.

Kokrak may not be as recognizable.

The 35-year-old had been playing well before arriving at Winged Foot with three straight top-15 finishes, including a tie for sixth at the BMW Championship, the second playoff event.

Kokrak got off to a solid start in good scoring conditions at Winged Foot with an opening-round 68 that put him three off Justin Thomas' lead.

But with the course and the wind much more difficult in the second round, scoring averages went up across the board.

Kokrak was among those struggling with the wind and hard greens early in his round. He had to chop out of the rough on the long par-4 second hole, leading to a bogey, and couldn't get up and down on the par-3 third after hitting his tee shot short right.

Kokrak went to 1 over with a bogey on the par-4 fifth hole, the second hardest on the course, after hitting into the right fairway bunker.

Kokrak bashed a 367-yard drive on the par-5 ninth hole and two-putted from 16 feet for birdie. He bounced back from a bogey on No. 12 with three birdies in four holes, starting at No. 14. He negotiated a difficult two-putt on No. 18 to close out his 1-over round and quietly walked off the green to a handful of claps at the spectator-less tournament.

“With it gusting out there, it was difficult on every shot,” he said. "You had to really pay attention. Any mental mistake is pretty much going to be a bogey. If you can leave yourself in a good spot, not too many swales to putt over, I think you’re going to do OK."

Kokrak has now put himself in position to win a major, something that has eluded him during his long, steady PGA Tour career. He missed the cut at this year's PGA Championship and his best finish in 12 previous majors was tie for 19th in the 2018 PGA Championship at Bellerive.

“I think (I'm) just becoming more and more comfortable in that position on Sunday,” he said. “Without fans, it’s definitely the energy is not there, but internally I definitely want to get that win, but I just want to play solid golf. I want to get better and better every year.”

He's in a pretty good spot this year.