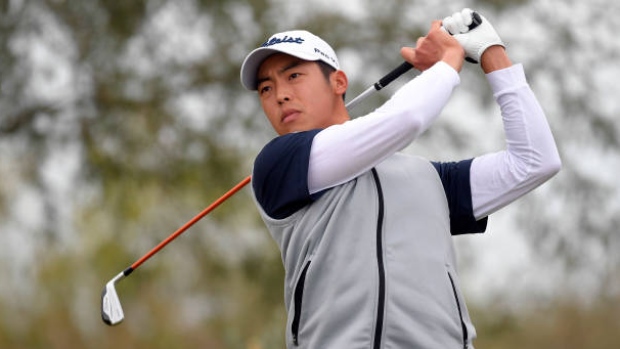 SAN JACINTO, California—Jeffrey Kang had just made a triple bogey-7 on No. 7 during Friday’s final round of the Mackenzie Tour – PGA TOUR Canada Qualifying Tournament at Soboba Springs Golf Club. He dropped to 3-over for the day, his three-stroke lead he held when the day began completely gone. He would make one more bogey on his front nine, shoot a 4-over 40 and suddenly just finishing among the top six was a prevailing thought.

But, what, Kang worry?

“I was surprisingly very calm after that,” he said of his immediate feelings following the triple bogey. “I didn’t think I was in trouble or anything, which was weird. I knew my game was there. I just needed to be patient. It was just one bad hole, and I’m glad I stuck to that.”

Prescient thinking, there. Kang quickly righted things, made a birdie at No. 10, added an eagle at the 15th and then decided to make it two eagles on his final nine—the last one in dramatic fashion on the 18th hole—to win the event by two shots over Joseph Harrison. Kang, a Southern California native who played college golf at USC, will be totally exempt for every Mackenzie Tour tournament on the 2021 schedule. Harrison and four others—David Longmire, Jeffrey Swegle, Shintaro Ban and George Markham—all secured full status for the season’s first half.

“Gritty day. Tough start,” Kang said when he realized he had won the tournament moments after leaving the scoring area. “After seven, basically my head was to get it back to even(-par) for the day. That’s all I really thought about.”

As he fought back, Kang stood on the 18th tee right where he wanted to be, the birdie and eagle getting him to his goal. As it turned out, unbeknownst to him, he was tied for the lead. Kang had one thought for the closing par-5: Hit a good tee shot, which he did, landing his ball in the middle of the fairway.

“I was in really good position. That’s all I wanted to do,” Kang said. Although he hit his second-shot approach shot over the green, the ball stopped just on the green’s fringe and he had a putt from 30 feet. “I actually didn’t know where anybody was at (on the leaderboard).

“Obviously, I needed good speed,” he said of his final putt of the tournament. “I didn’t want to leave it short. I don’t like doing that with my eagle putts. All I focused on was my speed. I thought I had a good lie, and it went in. Making eagle was a bonus. It was a good finish.”

So good that a birdie would have done the trick. Either way, his victory gives him Mackenzie Tour membership for the first time since 2016.

Meanwhile, Harrison was more than happy with his final-round 70 that secured him second-place honors. When the month began, he entertained thoughts of withdrawing from this event when he injured his back during a workout.

“Coming into this week, I would have probably taken a top-25 because I’ve been battling some lower-back problems. Two months ago I was basically not even able to swing.” Harrison will have a few months to continue to heal as he prepares for a Tour with which he is familiar. He’s played in 57 Canada tournaments between 2015 and 2019. His tie for second with Michael Gligic at the 2018 Windsor Championship is his career-best finish.

The Mackenzie Tour continues its Qualifying Tournament march next week with another qualifier, at The Wigwam, in the Phoenix, Arizona, suburb of Litchfield Park. It will be another Tuesday-to-Friday event.