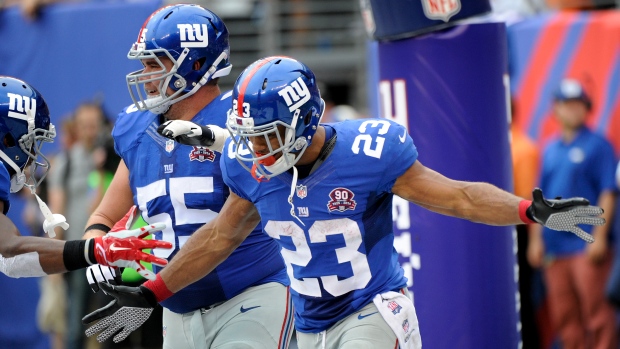 EAST RUTHERFORD, N.J. - With his team desperate to win, Tom Coughlin lightened the mood for the New York Giants during the week.

There was music — certainly not from the 68-year-old coach's era — at practice. A punt catching competition was held and there were some laughs. It turned to smiles and a W on Sunday against the Houston Texans with some old-fashioned football.

Rashad Jennings ran for a career-high 176 yards and a touchdown and Eli Manning threw two TD passes as the Giants overcame some early mistakes and beat the suddenly error-prone Texans 30-17.

The victory not only put some life back into the Giants (1-2), it also ended any chance of a second straight 0-6 start for Coughlin's team, which has missed the playoffs the past two seasons.

"It's good to get that first win," said Manning, who was 21 of 28 for 234 yards and no interceptions. "We didn't want to go through (0-6) again. The coaches and everybody didn't get too uptight. With coach keeping his cool, bringing a little excitement to practice, it helped the players just relax. We said: 'It's Sunday. Just go play football. Don't worry about being perfect or doing everything exactly. Just play the game you love.'"

Manning joked about the music played on Friday.

The Giants got a lot of contributions. Victor Cruz made a 26-yard touchdown catch, his first since Game 4 of last season, and danced the salsa. The defence intercepted three of Ryan Fitzpatrick's passes, and the special teams unit blocked a punt, setting up Manning's second TD.

"This was huge for us, knowing we had to get this game and get this one under our belts with a short week and not wanting to look ahead," said Cruz, who quipped that he had to remember how to salsa after his score. "We had to take care of this one and get ready for Washington (Thursday night)."

Fitzpatrick, who had not thrown an interception this season, threw a 44-yard scoring pass to Damaris Johnson and ran for another score for the Texans (2-1), who played without halfback Arian Foster (hamstring).

Houston came in tied for the league lead with a plus-5 turnover differential. The Giants were at the other end of the spectrum at minus-6 with no takeaways.

"We're not going to win any games when I play like that, especially in the first half with the turnovers," said Fitzpatrick, who was 20 of 34 for 289 yards. "Sometimes interceptions happen, but it was just poor play by me."

On Sunday, the Giants won the turnover battle, got pressure from their front four and dominated the Texans' defensive front in rushing for 193 yards in a much-needed win.

New York outgained Houston 262-83 in the first half in taking a 14-0 lead on the touchdown pass to Cruz and a 1-yard run by Jennings, which was set up by Antrel Rolle's 25-yard interception return to the Texans 2.

The lead should have been a larger. Tight end Larry Donnell fumbled at the Texans 4 in the first quarter after a reception, and Pro Bowl long snapper Zak DeOssie rolled one past holder Steve Weatherford on a short field-goal attempt in the second.

Houston added to its woes early in the third quarter, going for a first down on a fourth-and-1 from its own 46 and failing.

Brown hit a 39-yard field goal to make it 17-0 before Houston rallied behind Fitzpatrick. Three passes to DeAndre Hopkins set up a field goal, and Johnson's TD closed the gap to 17-10 with 2:13 left in the quarter.

Jennings, who carried 34 times, had three rushes for 28 yards as the Giants drove for a field goal to extend the lead to 20-10 early in the fourth.

Damontre Moore blocked Shane Lechler's punt to give New York the ball at the Houston 29, and Manning and Fells hooked up for touchdown for the second straight week.

NOTES: Jennings' previous career high was 150 yards vs. Houston last season while playing for Oakland. ... The Texans had not allowed a sack in their first two games. The Giants got two and had five quarterback hurries. ... Jameel McClain, who replaced Jon Beason at middle linebacker had a team-high 11 tackles and half a sack. ... New Jersey native Brian Cushing had a game-high 17 tackles. ... J.J. Watt had a sack and two tackles for losses. ... Alfred Blue had 78 yards on 13 carries, starting for Foster. ... Prince Amukamara also had an interception for New York. ... Johnathan Joseph had a fumble recovery for the Texans.