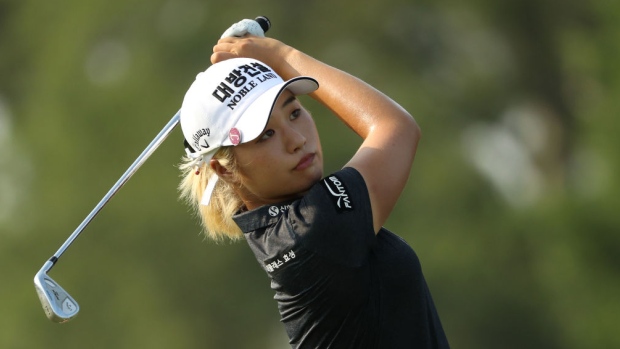 EVIAN-LES-BAINS, France (AP) — Jeongeun Lee6 tied the golf majors record for the lowest round ever when she carded a 10-under-par 61 at the Evian Championship on Friday.

Her bogey-free second round equaled countrywoman Hyo Joo Kim, who shot the lowest score by a female or male in a major in the first round in 2014 also at the picturesque Evian Resort on the shore of Lake Geneva.

After her 10 birdies in the second round, Lee6 led at 15 under, three shots clear of Thai players Pajaree Anannarukarn — the co-overnight leader — and Ariya Jutanugarn, who carded an 8-under 63.

“I had a lot of birdie chances,” Lee6 said. “I could play easily. My putting was really, really good.”

She made four straight birdies on holes 6-9, including a chip from the greenside rough on No. 8.

Caddie David Buhai had an easy day, because he just left her to it.

"Every putt looked like it was going to go in. It was incredible. Not one nerve, Speed was just perfect,” he said. “I had the best seat in the house, and I just kept my mouth shut. I wasn’t getting involved because she was that focused.”

Pajaree shared the overnight lead with teenage American Yealimi Noh, who posted a 3-under 68 and was tied with Lydia Ko of New Zealand in fourth at 9 under.

Ko is a 16-time LPGA Tour winner and won the tournament in 2015 for the first of her two majors. She opened with a bogey but made seven birdies in her 6-under 65.

Ayaka Furue of Japan sat one shot behind them at 8 under, while Inbee Park — a seven-time major winner who won Evian in 2012 before it became a major — and Kim were two shots back at 7 under.

New world No. 1 Nelly Korda recovered from her 3-over 74 on Thursday to post a 4-under 67 and join defending champion Jin Young Ko at 1 under.

She won at Evian in 2019 but the event was canceled last year amid the coronavirus pandemic.