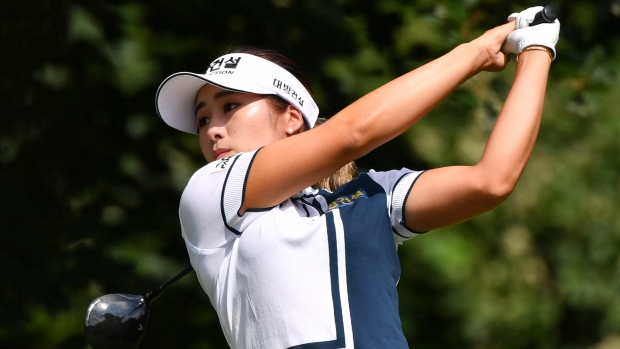 NAPLES, Fla. — On a course she didn't expect, Nelly Korda delivered the round she needed with a 6-under 66 that left her two shots out of the lead Thursday and gave her a good start toward winning LPGA Tour player of the year.

The $1.5 million prize for winning the CME Group Tour Championship is in range, too.

Former U.S. Women's Open champion Jeongeun Lee6 didn't make a birdie on rain-softened Tiburon Golf Club until the sixth hole, and then she didn't stop. She finished with three straight birdies for an 8-under 64.

Lee6 had a one-shot lead over four players, including past Tiburon winner Sei Young Kim. Scoring was so low that 18 players were at 67 or better.

Canada's Brooke Henderson wasn't one of them. The 24-year-old from Smiths Falls, Ont., shot a 71 to leave her in a group tied for 44th.

The 60 players who qualified for the season finale have the same chance to win the $1.5 million prize, the largest in women's golf, regardless of their standing in the Race to CME Globe.

The more compelling race is the points-based award for LPGA player of the year, which is down to Korda and Jin Young Ko, each with four victories. Korda has a 10-point lead, meaning Ko would have to be runner-up to have a chance.

The South Korean star has some catching up to do after a 69 left her in a tie for 25th, especially with Korda looking as sharp as she has for so much of the year.

“I gave myself some good looks inside 10 feet,” Korda said. “Two ‘oopsies’ with three-putts, but I think I hit the majority of the greens and gave myself some really good looks. ... Hopefully, I can carry it into the next three days.”

Hannah Green of Australia, who already picked up $1 million this week for winning the Aon Risk-Reward Challenge bonus program, took a step toward even more cash by joining Korda in the group at 66, along with U.S. Women's Open champion Yuka Saso.

Ko and Korda played in the final group, based on Race to CME Globe standings, and the South Korean star got off to a slow start. Her wedge to a back pin on the par-5 opening hole was too strong and went over the back, she putted up the slope and badly missed a 4-foot par putt. She rallied with two birdies on her last three holes.

Korda also started somewhat slowly considering the conditions, opening with a 7-foot birdie putt on the par 5 and then settling for medium-length chances even with short irons.

By then, several players already were at 5 under. That didn't surprise Korda given the nature of the course. The players dodged the worst of the weather, but Korda couldn't help but notice a number of tees moved forward based on the forecast.

“I was pretty surprised seeing a lot of tee boxes up,” Korda said. “I would love to know how far we were playing it today because I think they were anticipating a lot of rain. All of us were. But it was playing pretty short, and I think a lot of the girls could have short clubs in and be more aggressive on these greens.”

She finally joined in with birdies with a shot into 7 feet for birdie on No. 9, and then a wedge to 4 feet pin-high on No. 10 and another wedge to 8 feet behind the hole on the 11th.

Mina Harigae chipped in for eagle on the par-5 17th and then nearly made a hole-in-one on the par-3 eighth toward the end of her round. She was in the group at 65, along with Celine Boutier and Jennifer Kupcho.

Lexi Thompson, coming off bogey-bogey finish that led to a playoff loss, looked better over the short putts and closed with two birdies in her last three holes for a 67.

Only five of the 60 players at Tiburon shot over par.

Korda doesn't get distracted by much, and that includes a chance to be player of the year. She knows what's at stake. She was reminded again playing alongside Ko. And then she just went about her business, as always.

Otherwise, everything is in front of her.

“We're here. Everyone has a chance to win $1.5 million. Everyone is playing good golf,” Korda said. “You need everything to be on your side to win, so I just tee it up and I just try to take it one shot at a time. As boring as it sounds, I like that game plan.”