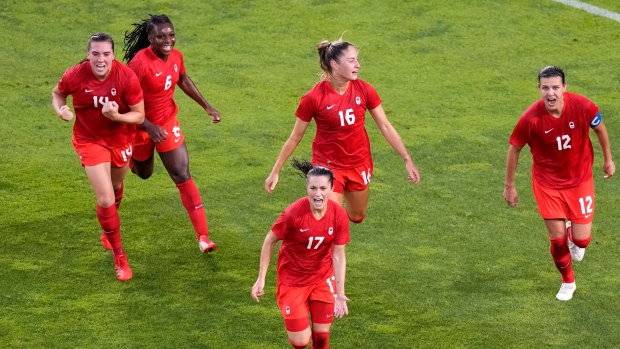 KASHIMA-SHI, Japan — After winning bronze at the last two Olympic Games, the Canadian women's soccer team preached that its goal this time around was to change the colour of the medal.

Mission accomplished on that front. Now it's just of matter of claiming gold instead of silver.

Jessie Fleming scored on a penalty kick in the 74th minute to help Canada to a 1-0 semifinal victory over the United States on Monday at Ibaraki Kashima Stadium. The Canadians withstood some late pressure by the top-ranked Americans to book their first-ever appearance in an Olympic final.

Eighth-ranked Canada will next play the winner of Monday's late semifinal between fifth-ranked Sweden and No. 9 Australia at Yokohama Stadium.

The final will be played Friday at the Olympic Stadium.

"I'm clear that winners win and we’re going into this final to absolutely get a gold medal," Canada coach Bev Priestman said.

The Americans will play for bronze on Thursday back at Kashima.

After a middling first half, the U.S. was the dominant team after the break. But Canada struck first after American defender Tierna Davidson was called for a foul when her left foot hit Deanna Rose's leg just inside the penalty area as they chased a loose ball.

Ukrainian referee Kateryna Monzul pointed to the penalty spot after a VAR review. American goalkeeper Adrianna Franch dived to the correct side but couldn't get a piece of Fleming's powerful shot inside the post.

"I took a deep breath and did what I’ve done before," Fleming said.

Canadian captain Christine Sinclair had a hat trick in the last Olympic meeting between Canada and the U.S. in 2012, a memorable 4-3 win for the Americans in extra time at Old Trafford.

"Back-to-back bronzes, we were kind of sick of that," Sinclair said. "And this team, I mean, wow, what a performance, what a fight. Just so proud of our team, and one more to go."

The American side, wearing white shirts and blue shorts, was aggressive from the start Monday but couldn't test goalkeeper Stephanie Labbé in the early going.

Canada, sporting all-red kit, took some time to settle in on a hot, humid evening. About 15 minutes into the game, the Canadians started to press more often and generated some chances.

American goalkeeper Alyssa Naeher had to leave the game after injuring her knee while attempting to clear a cross by Fleming. Naeher landed awkwardly after brushing teammate Julie Ertz as the ball sailed through the goalmouth.

Naeher stayed in the game for a few minutes but signalled she'd have to come out after attempting a kick with her right leg. She was replaced by Franch in the 30th minute.

The Americans seemed determined to create by pressuring the Canadian back line and forcing defenders to scramble. The Canadians, meanwhile, had more control of the midfield in the first half but struggled to capitalize deeper in the zone.

Neither team had a shot on target over the first 45 minutes. The pace picked up in the second half as teammates on the sideline bellowed words of encouragement to the players.

Mixed with the artificial crowd noise piped in the speakers, it was an odd soundtrack in the virtually empty stadium.

Both teams made substitutions in the 60th minute.

Veteran Megan Rapinoe came on for the U.S. along with Carli Lloyd and Christen Press. Priestman replaced Quinn and Nichelle Prince with Julia Grosso and Rose.

Lloyd tested Labbé with the first decent chance of the game in the 65th minute. Her shot from just inside the area forced Labbé to leap in the air and tip the ball over the bar.

Labbé was tested again moments later when an Ertz header off a corner kick forced the netminder to make another good save. Lloyd hit the crossbar late in regulation.

The Americans outshot Canada 13-3 and had a 4-2 edge on shots on target. The U.S. had possession 60 per cent of the time.

"At the end of the day it's a small margin to get by," Lloyd said. "They got through on a PK, and that's the game of football."

Canada improved its all-time record to 4-51-7 in head-to-head meetings with the U.S. dating back to 1986. Canada's last victory over the Americans was a 3-0 decision at the Algarve Cup in March 2001.

The Americans, who won the 2019 World Cup in France, have won gold at four of the last six Summer Olympics. The U.S. lost to Sweden in the quarterfinals at the Rio Games.

Germany, the Olympic champion in 2016, did not qualify for Tokyo.

Labbé has shone at these Games, particularly in Canada's quarterfinal victory over Brazil. Neither team scored in regulation or extra time but Labbé closed with back-to-back saves to help Canada win 4-3 on penalty kicks.

The U.S. also needed penalties to beat the Netherlands in the quarterfinals. The Americans and Canadians both finished second in their respective pools in group play.

All 22 players on Canada’s roster (including four alternates) have dressed at some point during the competition. Defender Jayde Riviere was suspended for the semifinal due to yellow card accumulation.

Canada dropped a 1-0 decision to the U.S. when the teams last met at the SheBelieves Cup in February.

This was the 303rd career cap for Sinclair, who leads all international soccer players with 187 career goals.

The Canadian women qualified for Tokyo by finishing runner-up to the U.S. at last year's CONCACAF Women's Olympic Qualifying Championship.