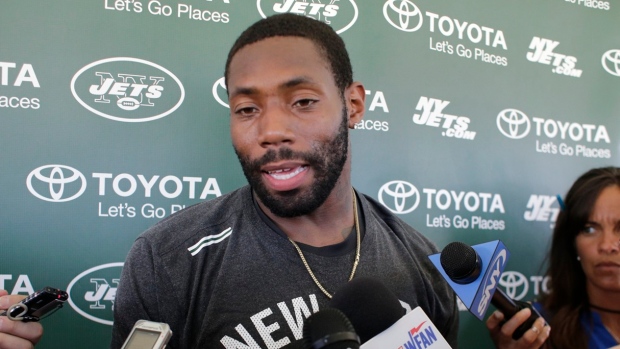 The New York Jets cornerback defended Brady during a television interview Thursday, saying the New England Patriots quarterback shouldn't be suspended by the NFL for his role in "Deflategate."

Cromartie, speaking on ESPN's "First Take" at Jets training camp Thursday, said fining Brady $25,000 should suffice for punishment because the team also was fined and docked draft picks. Brady has filed a lawsuit against the league after it suspended him and Commissioner Roger Goodell upheld the decision on appeal.

The support from Cromartie was a bit surprising considering he and Brady aren't exactly buddies. Cromartie referred to Brady with an expletive, ramping up an already-heated AFC East rivals as the teams prepared to face each other in the playoffs following the 2010 regular season.

Apparently, however, the hot topic of Goodell's range of authority is enough to get the Jets and Patriots to see eye to eye off the field.

Cromartie also said "nobody is safe" with how Goodell handles things, adding that the commissioner is "going to make his own rules as he goes."

Cromartie reiterated his comments after practice Thursday, believing a four-game suspension for Brady is out of bounds.

"If you look at the rules, anything messing with the football, the maximum fine, I think, is $25,000," Cromartie said. "It doesn't say you can go out and suspend anybody. The maximum fine is $25,000. To me, I just feel that he doesn't deserve the suspension."

Cromartie did acknowledge that it is the players' own faults for signing a collective bargaining agreement in 2011 that gives Goodell "the freedom" to rule on player appeals.

"I feel like we did give him a lot of power," Cromartie said. "But at the end of the day, when you go through the CBA, there's no changeup saying that he was supposed to have change-of-discipline or anything else. The commissioner has always had the discipline (power). But I just feel like at this point in time, the discipline that he's put forth, he's stepped outside the rules and made his own rules.

"If the rules are the rules, you need to keep the rules the same. You can't make your own rules as they go."

Cromartie is uncertain whether Brady was directly involved in the Patriots deflating footballs last season, but thinks the league is fumbling the matter, regardless.

"When you understand the rules dealing with game balls," Cromartie said, "you start to look at it like, 'Well, he is getting out of line with some of the things that he does.'"

Despite his criticisms of Goodell, Cromartie isn't concerned about the suspension Jets teammate Sheldon Richardson is facing. The defensive lineman was suspended four games on July 2 for violating the league's substance abuse policy, and could be docked more games by the league after he was charged with resisting arrest following a high-speed road race in Missouri in which he was travelling up to 143 mph.

"I think everything with Sheldon is going to go the way it needs to go," Cromartie declared. "It'll be handled the right way."

The reason for his confidence?

"Prayer," Cromartie said with a smile. "That's it."