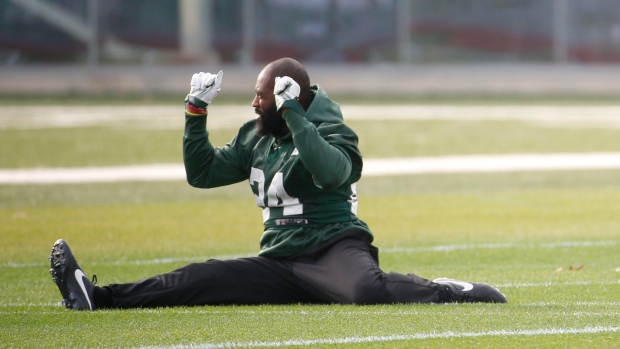 The New York Jets cornerback returned to practice Thursday on a limited basis for the first time since suffering a concussion in a game on Nov. 22 at Houston. While he isn't officially cleared yet to play, Revis has his sights set on being on the field Sunday against Tennessee.

"I practiced," Revis said in the locker room Thursday, "so I'll be ready for Sunday."

The star cornerback wore a red no-contact jersey as drills began, but it was a sure sign of progress after he missed two games. Revis attended practice Wednesday for the first time since the injury.

"The last couple of weeks have just been (about) following what the training staff has been telling me to do, and just trying to get through the concussion," he said. "I've had a couple in the past and this is one that has probably kept me out the most."

Revis also had a concussion in the 2012 season opener and missed a game with the Jets. The following season, the star cornerback said he "blacked out" in a game while playing for Tampa Bay, but missed no time.

"You can't play around with these things," Revis said. "These are serious. It's a blow to your head, so you've definitely got to follow every protocol that you can to get back on the field."

He is still going through the NFL's concussion protocol, and must be cleared by doctors before he can fully practice — the last step in his recovery.

"I think I'll pass that and move forward," Revis said.

Coach Todd Bowles was encouraged with Revis' progress, but wasn't predicting whether he would be ready to play. Not even after Revis made an interception during practice.

"I have to see a little more (Friday), and then we'll talk about it," Bowles said.

While Revis didn't discuss the exact symptoms he felt as a result of this concussion, he acknowledged he felt "pretty bad" during the first few days of his injury.

"You've got to let the brain rest," he said.

Until last Friday, Revis' daily routine included coming to the facility for treatment and then being sent home without even attending meetings. The 30-year-old Revis said he wasn't particularly scared by this concussion or the long-term effects of head injuries.

"I'm not really looking at that right now," Revis said. "You have one, they're all the same. You go through the same protocol. My job is to get back healthy and get back on the field."

Still, he recognizes that concussions are a serious matter.

"You don't wish a concussion or any type of injury on anybody," he said. "This is what we signed up for, but at the same time, if you have an injury or a blow to the head, you just have to follow the protocol and try to get back as healthy as you can."

Revis recalled the play during which he was hurt, when he tackled Texans running back Akeem Hunt after a 2-yard gain on third-and-2 in the third quarter of the Jets' 24-17 loss. Revis was originally listed as probable to return after he left the field.

Before he was hurt, Revis had an uncharacteristically tough game, getting beaten a few times by Texas star receiver DeAndre Hopkins. When asked how he would assess his play this season, Revis said flatly: "Ask Coach Bowles."

Well, Bowles has no concerns about his star cornerback's play.

"He got beat against Hopkins, but he was playing pretty well before that," Bowles said. "He had one or two times where he got beat and it looked worse than it was. He was playing good before that. I have all the confidence in the world in him."

Meanwhile, cornerback Marcus Williams was limited at practice after sitting out Wednesday with a sprained knee that sidelined him last Sunday against the Giants. Williams filled in for Revis for one game before being injured.