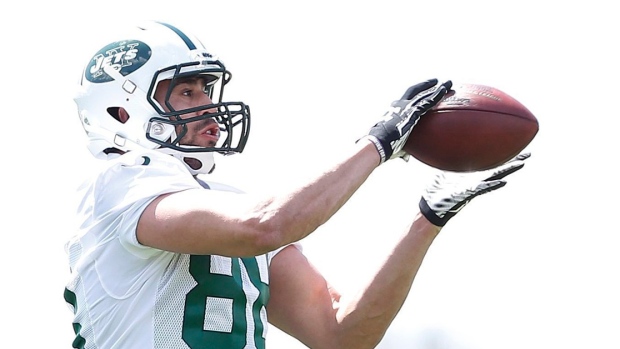 The New York Jets placed the second-year tight end on season-ending injured reserve with a torn labrum in his left shoulder. Amaro was hurt in the Jets' preseason opener at Detroit and the injury was at first thought by the team to be a sprain.

Coach Todd Bowles announced Tuesday that Amaro would need surgery to repair the shoulder. The Jets wanted to give Amaro a few weeks first to see if it would heal.

"He didn't get better, so the end result is we've got to do surgery and put him on IR," Bowles said. "He can't do anything. He's still in a lot of pain."

Defensive end Kevin Vickerson was also placed on injured reserve and cornerback Dashaun Phillips was waived/injured as the Jets pared their roster to the 75-player limit Tuesday. NFL teams must get down to 53 players by Saturday afternoon.

Amaro finished tied for second on the team with 38 catches for 345 yards and two touchdowns as a rookie last season. His injury is a big loss for the Jets, who were hoping for a breakout season from the second-round draft pick out of Texas Tech.

"Somebody's got to step up," Bowles said. "We've got a couple of guys playing this weekend that we want to see more of, and we'll look at it from there. This is a chance for somebody else to play."

Amaro recently told The Associated Press in an interview that he was looking forward to putting last season behind him, when he was criticized at times for some drops and lapses in concentration.

"If it's a fact, it's a fact — and you've got to prove it otherwise," he said at the time. "I caught almost 110 passes in college in one season, so I know I can catch the ball. It's really the least of my worries, being able to catch the ball."

He also drew the wrath of Rex Ryan, his former coach who's now in Buffalo. The two had a back-and-forth during the off-season after Ryan was angered by Amaro's opinion that the Jets lacked accountability last season.

Ryan then paused for a few seconds before adding with a smile: "But I wasn't exactly afraid of him."

Amaro appeared to be improving as a blocker early in camp while learning new offensive co-ordinator Chan Gailey's system — although he had been listed third on the team's depth chart at tight end, behind Cumberland and Davis.

Now, Amaro will have to wait until next season to get back on the field.

"I mean, he was bummed out about it," Bowles said. "But, if you're in pain and you're not getting any better, you've got to fix it sooner than later."

Vickerson was signed in the off-season after one season with Kansas City following stints with Miami, Tennessee, Seattle and Denver. He was sidelined for a few weeks at the start of training camp with a hamstring injury before being activated from the active-physically unable to perform list on Aug. 10. He did not play in the preseason.

Phillips was signed to the practice squad last October and signed a reserve/future contract in late-December.

NOTES: Bowles announced that Willie Colon won the right guard job, beating out the likes of Brent Qvale and Brian Winters. "He played like he wanted it more," Bowles said. "He was the hungriest." ... Bowles said QB Matt Flynn will play "a lot" in the preseason finale against Philadelphia, and Josh Johnson will be under centre "some" as the two compete for a backup role. Both quarterbacks will be making their Jets debuts. Bowles hadn't yet determined whether rookie Bryce Petty would play after getting extensive time in the first three preseason games. ... DL Sheldon Richardson won't play against the Eagles despite facing at least a four-game suspension for violating the NFL's substance abuse policy. "We've seen enough of Sheldon to know what he can do," Bowles said. DE Muhammad Wilkerson also won't play. He was limited to just one preseason game because of a hamstring injury that sidelined him early in camp.