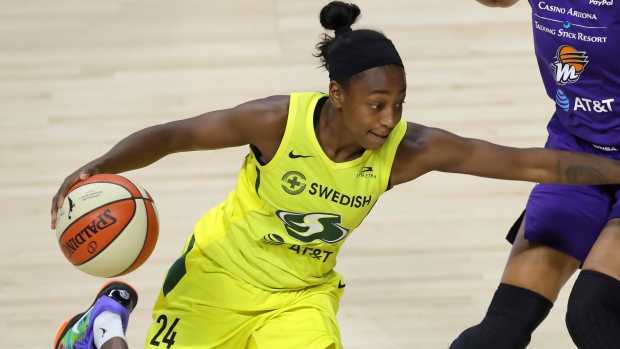 The teams also played Wednesday night and the Liberty came away with a four-point win, rallying from a 10-point deficit in the fourth quarter. The Storm didn't have Sue Bird and Stewart in the lineup for that game as the pair missed the team's last two games -- both losses -- while resting after helping the U.S. win a seventh consecutive gold medal at the Olympics.

Stewart also spent time at home with wife Marta Xargay Casademont and their new baby daughter Ruby, who was born via surrogate Aug. 9.

Now with the two back in the lineup, the Storm (17-7) turned a one-point halftime deficit into a blowout. The game was tied at 59 midway through the third quarter when Seattle closed the quarter on a 17-4 run. Loyd and Stewart each scored six points during the burst.

The Liberty (11-13) couldn't recover in the fourth quarter.

Sami Whitcomb scored 15 of her 26 points in the first quarter to lead New York.