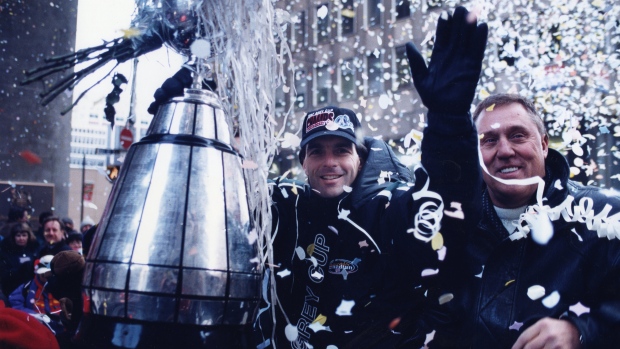 The Don is gone, but will never be forgotten by Jim Popp.

Don Matthews, one of the most prolific coaches in CFL history, died three years ago Sunday — June 14, 2017 — at the age of 77. The native of Amesbury, Mass., spent 22 seasons as a CFL head coach, winning 231 games and five Grey Cups.

Matthews also helped Edmonton win five straight CFL titles (1978-82) as defensive co-ordinator before taking his first head-coaching job with B.C. in 1983. But it was with Saskatchewan in 1992 that Popp and Matthews first hooked up with Popp serving as a receivers coach on Matthews' staff while also working in personnel.

"I have a very special bond with Don," Popp said. "He didn't let a lot of people in his world and we had a very respectful and great relationship.

"Sometimes head coach/GM, sometimes brother-brother, sometimes father/son. Whatever it was, we had it."

Matthews and Popp would also work together on two more occasions. They were head coach/player-personnel director with the expansion Baltimore Stallions (1994-95) and Popp was Montreal's GM when Matthews served as head coach (2002-06).

Twenty-five years ago, Matthews and Popp led Baltimore to a CFL championship, with the Stallions becoming the first — and only — U.S. club to win a league title. They also combined for a title in Montreal in 2002.

Matthews was affectionately dubbed The Don, and for good reason. He was a larger-than-life character with a sharp wit who not only thrived in the spotlight but enjoyed keeping people around him on edge with his abrasive, no-nonsense style.

"If you weren't in (Matthews') doghouse, things were fine," said Hall of Fame running back Mike Pringle, who played for Matthews in Baltimore and Montreal. "If you got into his doghouse, that wasn't a good place to be.

"He gave us a lot of freedom to be who we wanted to be on and off the field as long as we showed up and performed on gameday. If we didn't, that's when you'd see his personality come out as an authoritarian."

But players traditionally loved suiting up for Matthews because he created a winning atmosphere and protected them. Once the season began, Matthews’ teams rarely hit in practice and he routinely allowed players to participate in creating the weekly gameplan.

But Matthews, who was inducted into the Canadian Football Hall of Fame in 2011, could also be ruthless. He never shied away from benching or releasing a veteran if he wasn't producing.

"I always questioned when he'd cause himself stress," Popp said. "He did it because, as he said, 'It's part of my fun.'

"We didn't always agree by any means but that was the beauty of it. Don was a very giving person but he didn't want people to know that. He loved taking the attention away from the players. He always told them in the room, 'I'm going to do things this week so you guys can concentrate on the game. They're going to chew on my ass.' He did that."

Matthews also wasn't above making last-minute changes to the gameplan.

"Sometimes he'd drive a coach nuts because they'd work on a gameplan for five days," Popp said. "Then Don came in an hour before the game and go, 'Hey, I was watching film and we're going to do this,' and everyone would be like, 'What the heck?'

"It didn't work every time but a lot of times it worked."

Though he rarely showed it publicly, Matthews also had a softer side.

When he was Argos head coach, he attended a book launch for running back/slotback Mike (Pinball) Clemons. Matthews was holding Clemons’ baby daughter, Raven, during the news conference when she began to squirm. To calm the little girl, Matthews removed one of her shoes and gently rubbed the bottom of her foot, settling her down immediately.

"People never realized it but Don was very well read," Popp said. "He read books all the time.

"He helped underprivileged people all the time and he even tried to help players. Now he'd stand toe-to-toe with them, face-to-face and jaw-to-jaw, but he never held that against someone until they crossed him wrong."

And most importantly, Matthews was a man of his word.

"He and my dad became really close," Popp said. "He told my dad one day, 'I'll always take care of Jim,' and he's proven that to me.

"He always stood in my corner and I always felt the same way about him."

Popp said Matthews tried to get him to come to Toronto after Baltimore's 95 title but he opted to remain with the franchise when it relocated to Montreal.

"He thought I was the craziest person ever when I went to Montreal because he didn't think it would work there," Popp said. "But I went because I enjoyed the build and wanted to see it through.

"When he took the job in Montreal (in 2002), that's the first thing he said to (Als owner Bob Wetenhall). He goes, 'Before I even answer a question, I just want to tell you I never thought it would make it here. I told Jim that . . . the only reason I'm here to talk to you guys is because Jim is here.'

"I asked Mr. Wetenhall to just sit down with him for an hour because I thought he'd see the football guy. It was one interview and it was done."

But as driven and successful as Matthews was, Popp said he wasn't above changing his approach.

"Don never wanted a young, rookie player," Popp said. "He never believed that could work until Baltimore and after that happened Don changed his mind, he realized this could work.

"We got some great veteran CFL veterans and surrounded them with great players who knew nothing about the league and it was quite a growing experience. It wasn't an overnight, do everything right sort of thing but rather teach them the right way with great leadership in that room and it just worked."

New England's Bill Belichick — a six-time Super Bowl champion — is regarded as the dean of NFL head coaches. But Popp only chuckles when Belichick makes headlines for his brash, sometimes abrasive nature.

"It's not like stuff hasn't been tried or done in our league and Don was the one who did it," Popp said. "Don and Belichick are both tremendously smart people but I kind of laugh when that happens because seen that, done that, heard that before."