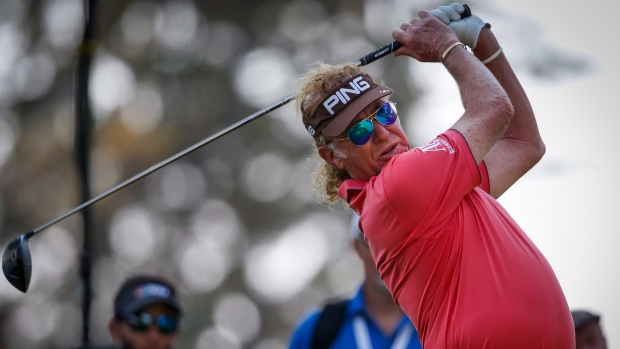 MADISON, Wis. (AP) — Miguel Angel Jimenez had two eagles in a 7-under 65 in hot and humid conditions Friday to take the first-round lead in the PGA Tour Champions' American Insurance Championship.

Jimenez eagled the par-5 16th and second holes and had four birdies and a bogey in the round that start on the back nine at University Ridge. The 57-year-old Spaniard has 10 victories on the 50-and-over tour after winning 21 times on the European Tour.

“I’ve been playing very solid. I played very, very solid all day,” Jimenez said. “My putting was working also. That’s what you need."

Jimenez made a 9-footer on No. 16 and a 2-foot putt on No. 2 as the temperature rose into the low 90s. Late afternoon play was delayed for two hours because of lightning.

Defending champion Jerry Kelly was second after a 67 in his hometown event. He eagled the second and had three birdies.

“I just love playing in front of Wisconsin crowds,” Kelly said. “I love it.”

“To be honest with you, if we did this for another month or so, it wouldn’t be a problem, but it’s like our first tournament with humid and hot heat,” Couples said. “It will whip you. No, I’m not going to die. I mean, I hope not. But again, it’s the first day. Last week, I played in Des Moines. It was a little warm, but nothing like this.”

Tournament host Steve Stricker opened with a 70. The U.S. Ryder Cup captain played alongside Couples and Furyk in the first group off the first tee.

“This is August weather in Wisconsin,” Stricker said. “Like on 18 there with all the stands around there, there’s no breeze whatsoever, so it was very hot at times."

Hall of Fame pitcher John Smoltz, making his fifth tour start of the year on a sponsor exemption, opened with an 80. He was last among the 80 finishers, a stroke ahead of 71-year-old Andy North and 63-year-old Gary Hallberg.