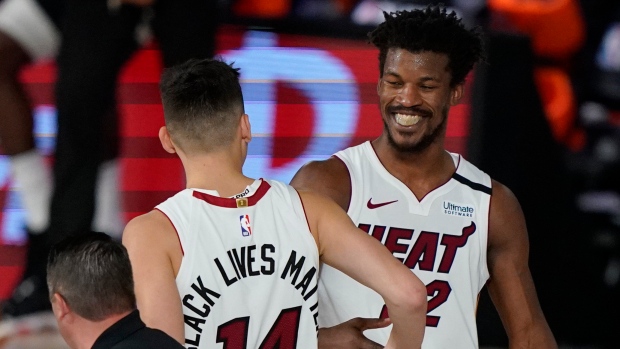 The Miami Heat are coming into the NBA Finals as heavy underdogs to LeBron James and the Los Angeles Lakers.

But don’t tell that to Jimmy Butler.

Miami’s rough-and-tumble superstar told reporters Tuesday the Lakers are a “really good team” but maintained his side isn’t intimidated. He doesn’t even think they deserve the label of underdog.

"That's it. A really good team. Not going to say that we're any better than anybody else, but I just don't think that we're underdogs. I don't,” Butler said.

"So what that nobody picked us to be here? That's okay. Pretty sure nobody is picking us to win, either. That's okay. But we understand that. We embrace that, because, at the end of the day, we truly don't care.”

Butler might not care what the oddsmakers have to say, but what they’re saying is pretty definitive – the Lakers are the clear favourites.

Despite a lot of money going Miami’s way earlier in the week, the Heat currently sit at +300 to win the series, according to the William Hill Sportsbook.

ESPN’s Tim Bontemps writes the Heat came into the season at 75-to-1 odds to win the Larry O’Brien Trophy, according to ESPN Stats & Info. The only team in the past 30 years to reach the Finals with such low odds at the start of the year were the 60-to-1 New Jersey Nets in 2001-02 and they were easily swept by the Kobe Bryant and Shaquille O’Neal-led Lakers.

In that same period, no team that’s opened the season at longer than 30-to-1 odds has won the title. The 28-to-1 Golden State Warriors in 2014-15 – the first of the Warriors’ three championships in four years – are the longest shot in the modern era.

While the Heat have lost only three games during the playoffs and L.A. has dropped Game 1 in two of their three series, the Lakers range from four to four-and-a-half-point favourites in Wednesday’s opener.

“I’m here for one reason and one reason only, and that’s to compete for a championship,” James told reporters Tuesday night.

The four-time MVP is seeking his fourth championship ring, while the Lakers are seeking their first since 2010.

Watch Game 1 LIVE across the TSN Network, on TSN.ca, the TSN App and on TSN Direct Wednesday night at 9 p.m. ET/6 p.m. PT.