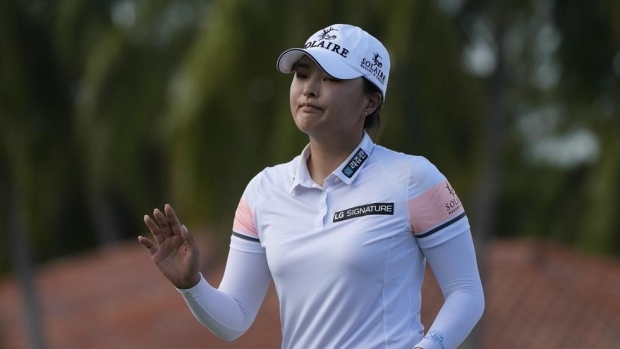 For the third time running, the $3 million event honoring the 13 founders of the LPGA Tour is being played on a different course.

When Ko won in 2019 it was at Wildfire Golf Club in Phoenix. After the pandemic canceled the 2020 edition, the world's top-ranked player defended her title at Mountain Ridge Country Club in West Caldwell, New Jersey.

The 26-year-old South Korean will have limited course knowledge when the field of 144 golfers tees off on Thursday at the Upper Montclair Country Club, which is roughly 10 miles from New York City.

After taking Monday off, Ko practiced Tuesday and said the tree-lined course with quick greens surrounded by bunkers will be a challenge, especially if it is windy like it was on Wednesday.

“I love this golf course," Ko said. “It’s tough. Greens are fast, and the rough is thicker, and a lot of bunkers greenside, so I practiced a lot of bunkers on the practice area. I love to play Mountain Ridge. Also, Arizona.”

A 13-time winner on the LPGA Tour, including two majors, Ko is clearly the favorite. She finished second to Marina Alex in the Palos Verdes Championship in California. Ko has played in five events this year and finished in the Top 10 in three.

Ko scoffs at being called the favorite, though.

“I would say I don’t care,” she said. “I don’t care the other people think about Jin Young is going to be winning or if they’re expecting for, like, one more win for this week. I don’t care. I just care about myself, how to play this golf course.”

Seven of the top 10 players in the world are in the 72-hole event, with Nelly Korda, Hyo Jin Kim and In-Bee Park not here.

Alex also is in the event, which is roughly 10 miles from her family's home in Wayne, New Jersey. She rallied in the final round in California 1 1/2 weeks ago to post her second tour win. She missed time in 2020 with back problems and is just getting her game back.

“It’s very hard when you feel like you can’t totally prepare the way you would like to to have the confidence to go in and play well, because that’s always in the back of your mind,” Alex said.

NOTES: LPGA Hall of Famer Nancy Lopez will hit the ceremonial first tee shot on Thursday. ... Veteran Brittany Lincicome is in the sixth month of her second pregnancy. “I don’t want to shut it down yet because then the time is just going to go by really slow, so I’m going to keep playing as long as I possibly can, as long as I feel comfortable and I’m not too big yet. We’re going to keep it going,” she said. Her daughter, Emery, will be 3 this summer. ... Upper Montclair has been the site of tournaments on all three tours. Lopez won the 1979 Coca-Cola Classic here. Fellow Hall of Famer Pat Bradley won the 1984 Chrysler Plymouth Charity Classic, and Lorena Ochoa was the Sybase Classic victor in 2007 and ’08. ... The two sponsor invitees are 16-year-old Anna Davis, the 2022 Augusta National Women’s Amateur champion and Lakareber Abe, who earned her spot in the field after winning the inaugural John Shippen Women’s Shootout on Monday.