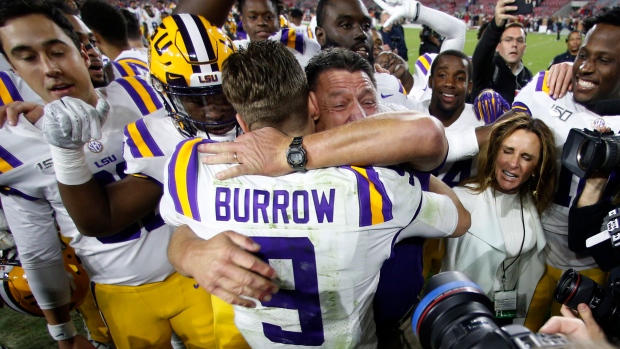 The Tigers (9-0, 5-0 Southeastern Conference) are no longer second fiddle in the SEC West, or maybe in the playoff rankings. And Burrow stamped himself as the Heisman Trophy front-runner with a gutty performance when he answered every challenge from Bama.

And the challenges were plentiful.

The Crimson Tide (8-1, 5-1) rallied from a 33-13 halftime deficit to three times pull within a touchdown in the fourth quarter. It kept going from game seemingly over to game on.

The showdown lived up to its billing as a duel between two high-powered offenses and star quarterbacks with President Donald Trump attending. Tua Tagovailoa launched an 85-yard touchdown pass to DeVonta Smith with 1:21 left after the Tigers' own scoring march.

Justin Jefferson recovered the onside kick and LSU ran out the clock.

Burrow completed 31 of 39 passes and ran for 64 yards and was carried most of the way off the field by two teammates.

That's what Burrow sought when he transferred to LSU from Ohio State.

"We're not done yet," the two-year starter said. "It's Game 9. We've got three more regular-season ones and the SEC championship. This was never our goal. We've got bigger goals than this."

Clyde Edwards-Helaire ran for three touchdowns and caught a scoring pass, getting emotional on the sideline after a late touchdown that appeared once again to put the game away.

Tagovailoa, 20 days removed from ankle surgery, was 21-of-40 for 418 yards and four touchdowns with an interception and a fumble. He was called a "game-time decision" all week, looked shaky early and appeared to be limping after the game, but he kept Alabama in it.

Smith had 213 yards and a pair of touchdowns on seven catches for Alabama.

LSU outgained Alabama by a slender 559-541. The Tigers had scored just 39 combined points in the previous five meetings.

LSU: The Tigers have eight wins over top-10 teams in the past two seasons, none bigger than this. Burrow & Co. faced down a 101,000-plus mostly hostile fans and a strong pass rush. They scored two touchdowns in the final 26 seconds of the first half in a pivotal flurry that threatened to be overshadowed by the second-half drama.

Alabama: It didn't wilt under the adversity of a season previously characterized by lopsided wins over teams currently unranked. Could be shut out of the playoffs barring some upsets elsewhere, mostly because of that schedule. Tagovailoa had a fumble and an interception in the first half.

"We don't really control our own destiny, but if we finish the season the right way, we can see where it takes us," Saban said.

The running backs delivered. Edwards-Helaire ran for 103 yards on 20 carries and had nine catches for 77 yards. Alabama's Najee Harris, who didn't have a carry in the second quarter, finished with 146 rushing yards and a touchdown and added a receiving score.

LSU: At Mississippi on Saturday night.

Alabama: At Mississippi State on Saturday.