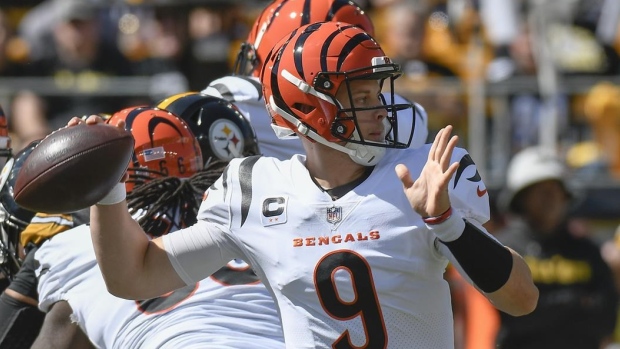 But there is still much mutual respect and admiration, so much so that Meyer, as a rookie NFL coach, went to Burrow for advice last spring about how to handle his new quarterback, top overall draft pick Trevor Lawrence.

“I just wanted to talk to a guy who was in that position in recent history,” the Jacksonville Jaguars coach said Monday. “We talked several times throughout the spring, just about what I could do — what we could do — to help our rookie quarterback.”

Burrow is the unflappable second-year quarterback who is having a franchise built around him in Cincinnati. Meyer, returning to Ohio for the first time as a NFL head coach with the 0-3 Jaguars, will be on the opposite sideline at Paul Brown Stadium for a Thursday night game.

Burrow came to Columbus as an unheralded recruit in the 2015 class and languished on the depth chart until transferring to LSU and eventually winning the Heisman Trophy and a national championship.

Burrow never really got a chance to be the guy at Ohio State, but he credits Meyer with having an important hand in his early development, even if the treatment was at times unpleasant.

“He was really hard on me, and it made me a better player and better person,” Burrow said.

“What he does is, when he gets a new player, he tries to put them in a very intense situation to see how they respond, to see if he can trust that player,” Burrow said. “He really did that to me early in my career. I really wasn’t sure why it was happening. But then as I got older and more mature, I really understood why he was doing it, and it did make me better.”

Burrow in his senior year in high school was voted by writers as the best football player in Ohio. But it was seeing his relentlessness on the basketball court that made an impression on Meyer.

“He arguably has one of the best mindsets I’ve ever seen in an athlete,” Meyer said. “Even when he struggled early in his career, one thing you could count on is, that guy is tough as nails, a competitor. Refused to lose at anything.”

Burrow's dad, Jimmy, was the defensive coordinator for Ohio University under Frank Solich at the time. Joe was a two-sport star at Athens High in southeastern Ohio.

“He'll tell you he was highly recruited — he wasn't,” Meyer said with a smirk.

Burrow had a frustrating three years at Ohio State. When it looked as if he would be in line to back up four-year starter J.T. Barrett in 2017, he broke his hand in the preseason. Dwayne Haskins passed him, won the Michigan game in relief of the injured Barrett and was the favorite to start in 2018.

With his Ohio State diploma in hand and two years of eligibility remaining, Burrow transferred to LSU that summer. He made college football history with his stats in 2019 and became the top overall draft pick by the Bengals in 2020.

His Heisman speech, during which he talked about poverty in his rural hometown, inspired $650,000 in donations to the Athens food bank. His high school named the football stadium after him.

The 57-year-old Meyer, who grew up in Ashtabula in southeastern Ohio and played collegiately at the University of Cincinnati, coached Florida to a pair of national championships and won another at Ohio State.

Citing health reasons, he retired in 2018 after seven seasons leading the Buckeyes. He worked as a Fox TV analyst for two years before taking the NFL job.