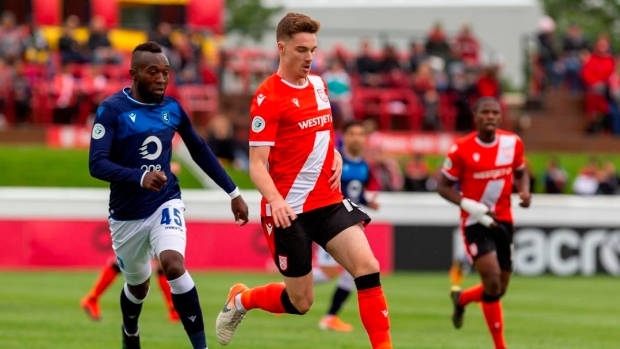 The 14th pick in the inaugural CPL–U Sports Draft, Joel Waterman arrived in the Canadian Premier League with little fanfare to most.

But Cavalry FC coach and GM Tommy Wheeldon Jr. knew what he was getting, having coached Waterman with the Calgary Foothills PDL team.

Waterman did not disappoint as a first-year pro in the Canadian Premier League in 2019. And while Waterman was injured for Cavalry's Canadian Championship semifinal series with Montreal, Wheeldon made sure to talk up some of his talent — including Waterman — to Impact coach Remi Garde.

Garde is gone now but Montreal did not forget. The Impact added Waterman to its roster this week, making him the first CPL player to be sold to another league on a permanent transfer.

He hopes his story will inspire other players to keep chasing their dream.

Waterman had two practice sessions in Montreal this week before heading to Florida on Thursday for some MLS warm-weather training. He admitted to pinching himself a few times after taking the field with the likes of Argentine star Ignacio Piatti, not to mention former Arsenal and Barcelona star Thierry Henry calling the shots as coach.

The 23-year-old from Aldergrove, B.C., played 1,900 minutes last season in 25 games in all competitions with Cavalry FC.

"He leaves behind a unique Canadian pathway being one of the first CPL-U SPORTS draft picks to be transferred to another league," Wheeldon said in a statement. "As a club we wish him all the best in his future and thank him for being one of the historic first Cavalry FC players in our history. Whilst Joel leaves big shoes to fill, he also creates another opportunity for another young Canadian player to fulfil their dreams of playing professionally in their country."

Waterman spent five years playing at Trinity Western University, helping the school in Langley, B.C., to a fourth-place finish in the U-Sports championship tournament in 2018.

He had nine goals and five assists in 57 career games (48 starts) with the Spartans.

The six-foot-two 165-pounder grew up playing in central midfield but was shifted to centre back by Wheeldon in 2018.

"I've enjoyed both positions," said Waterman. "I think that's one of the reasons why Montreal decided to acquire me, because I can play different positions."

An excellent passer with good field vision, Waterman is a good distributor of the ball no matter where he plays.

Waterman also played three seasons in the USL Premier Development League, with the Kitsap Pumas in 2016, TSS FC Rovers in 2017 and the champion Calgary Foothills in 2018.

"Looking back I'm glad I went through everything I did," he said. "Obviously I went through a lot of no's before I got this one yes. But it was all worth it in the end."

His calls his time under coach Mike Shearon at Trinity Western "life-changing."

"Obviously my first couple of years I came to play football and that was my No. 1 goal," he said. "But in my third year, I became a Christian and I started to look at football in a different light. I started to look at it more as a community, what could I do with this platform to reach more people.

"It's definitely helped me as a person both on and off the field, in coming to the realization that this is all God-given."