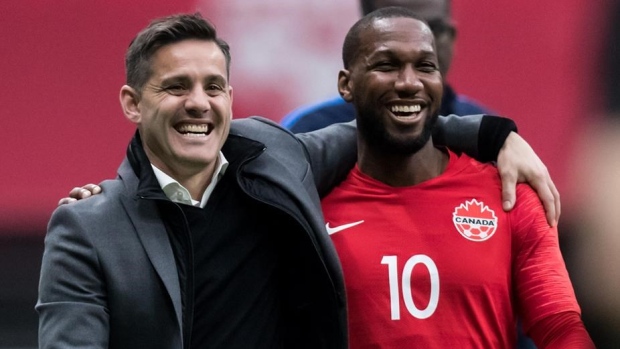 Herdman, who hails from Consett, England, just outside of Newcastle, will be settling down for his pre-game nap before Canada's opening match against Martinique at the Gold Cup in Kansas City. The England-Italy final kicks off at London's Wembley Stadium at 3 p.m. EDT, some three-and-a-half hours before Canada's contest.

Herdman, who turns 46 during the Gold Cup, has his eye on the prize.

"These are the sacrifices as coaches," Herdman said with a smile, noting he also missed seeing his son play Saturday.

"My focus has to be on the (Canada) game," he added. "At that time I'm usually in my nap time. It's about a 45-minute sleep, while (the England-Italy) game is kicking off. And then straight from there, I'm off preparing for my meeting and (then) into the meetings.

"So no, I won't see it come home if it does come home," he said referencing the song "Three Lions," better known as "Football's Coming Home," written for England's Euro '96 campaign. "But ultimately my home's Canada now. We're here to bring football home to this country."

Canada, ranked 70th in the world, opens against unranked Martinique before facing No. 83 Haiti on July 15 and the 20th-ranked U.S. on July 18 in Group B play at the CONCACAF championship. All three games are at Children's Mercy Park in Kansas City.

Herdman will be without star fullback Alphonso Davies, who has returned to Bayern Munich after getting hurt in training with Canada earlier in the week.

Herdman said the 20-year-old turned his ankle after riding a tackle in a small-sided game.

"As he was walking backwards, he just went on to his ankle. Just a bit of a twist," said Herdman. "But obviously with those things, sometimes it can be a while and sometimes it's a quick return. Unfortunately he'll be a little bit longer (recovering) than we hoped for the tournament."

"It's disappointing, it really is. Particularly the way it happened," he added. "But at the same time, hopefully it opens the door for somebody else to grab the limelight."

Herdman said he had yet to decide whether to name a replacement for Davies. One option was to do so but leave the player with his club team, so he can continue training there.

Considered part of France, which colonized it in 1635, Martinique is unranked because it is not a member of FIFA. But like fellow French overseas entities French Guiana and Guadeloupe, it is an associate member of CONCACAF.

Part of the Lesser Antilles island chain in the Caribbean, its nearest neighbours are Dominica and Saint Lucia.

Canada is 2-1-2 against Martinique, winning 4-0 last time out when they met in group play at the 2019 Gold Cup at the Rose Bowl in Pasadena, Calif. Six years earlier at the same tournament venue, Martinique upset Canada 1-0 on a 93rd-minute long-range rocket by Fabrice Reuperne. Canada finished bottom of its group and failed to advance.

In 2002, Canada needed a penalty shootout to dispatch Martinique in the quarterfinals of the Gold Cup after the game finished at 1-1.

Martinique is making its seventh appearance at the CONCACAF championship. It has won a match in its last three appearances, beating Canada in 2013, Nicaragua (2-0) in 2017 and Cuba (3-0) in 2019.

The Canadian men go into Sunday's match on the back of six straight World Cup qualifying wins, outscoring the opposition 31-1 en route to the final round of qualifying in the region that covers North and Central America and the Caribbean. That run included a two-legged 4-0 aggregate win over Haiti last month.

"We're confident but well aware of this different moment," said defender Steven Vitoria. "We don't want to get too caught up in what we just achieved. It was nice but now we turn the page and focus on this Gold Cup."

Added Herdman: "This is a tournament. Anything can happen in tournaments. We know they're going to be really up for it and so are our players."

While 18 of the 23 Martinique players for domestic clubs, the other five play their trade in France (two), Israel, Italy and Spain

This report by The Canadian Press was first published July 10, 2021.