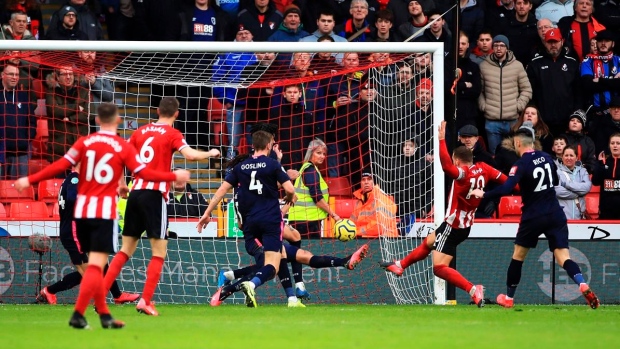 SHEFFIELD, England — Sheffield United beat Bournemouth 2-1 in Sunday's only English Premier League game after Manchester City's match with West Ham was called off due to a storm.

John Lundstram scored the winning goal as Sheffield recovered from 1-0 down to claim a win which sees it overtake Tottenham for fifth. Challenging for the Champions League spots in February is a major achievement for promoted Sheffield, which is two points off Chelsea in fourth, though Chelsea has a game in hand.

Callum Wilson gave Bournemouth the lead in the 13th minute on a wet pitch, blasting the ball into the roof of the net on a rebound from Harry Wilson's shot.

The sun came out midway through the first half, and veteran striker Billy Sharp levelled the score in first-half stoppage time on a rebound after a corner.

Bournemouth could have had a third consecutive Premier League win if not for a fine reaction save by Sheffield goalkeeper Dean Henderson to stop the unmarked Ryan Frazer's powerful shot in the 71st.

However, it was Lundstram who had the last word when he scored in the 84th off a square ball from Lys Mousset,

Second-placed City's meeting with West Ham was scheduled for Sunday evening but was called off in the morning on safety grounds. City said the weather was “extreme and escalating.”

Numerous other sports events across Britain were also scrapped due to the weather and concerns about fans' ability to travel amid widespread disruption to train services.