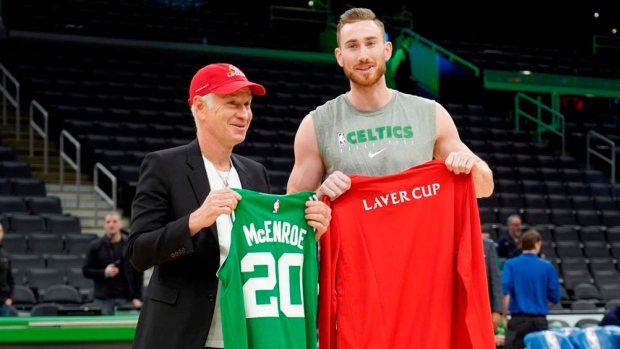 Federer announced last month that he will miss the French Open and at least three other tournaments while he recuperates. Federer indicated he would return by Wimbledon in late June.

The Swiss star has spent more weeks ranked No. 1 than any player and owns a men’s record 20 Grand Slam titles. He currently is ranked No. 4 behind Novak Djokovic, Rafael Nadal and Dominic Thiem.

McEnroe was in Boston Tuesday promoting the fourth edition of the Laver Cup, which will be held at TD Garden in September. He said watching Federer competing at age 38 has parallels to another dominant athlete in Boston.

“It's like asking the same question on Tom Brady. You know, it's the exact same thing," McEnroe said. “I mean, how they keep doing it would be the first thing at their age. It's phenomenal, right? I mean, how in the world are these guys still playing at such a high level?

“I’ve admired watching Tom Brady because he makes players around him better. But you’re out there on your own and you’re 38 and you could be turning 39 on a tennis court with the wear and tear. That’s really tough. … It’s already amazing he’s made it this far.”

McEnroe was coaching Milos Raonic in 2016 when he beat Federer at Wimbledon, the only time Raonic has beaten him in a major.

“Then Roger limped off the court and didn't play for six months. And I thought, you know, that's pretty much it,” McEnroe said. “That's four years ago. And he came back after not having played for six months and managed to win the Australian Open (the next) year, winning three best-of-five set matches, which is virtually unheard of to begin with, and to win three majors post-surgery. So you never can count him out.”

Federer, whose TEAM8 management company helped create the Laver Cup, has played in each of the first three editions of the event, which pits a six-man team from Europe against a team made up of players from the rest of the world.

McEnroe and his former rival Bjorn Borg served as captains of Team World and Team Europe, respectively, for the first three events in Prague (2017), Chicago (2018) and Geneva (2019) — all won by the European team.

They will reprise those roles for the fourth edition in Boston from Sept. 25-27, which has been added to the official ATP calendar.

McEnroe said his latest meetings with Borg as coaches have been as intense as they were when they were tour players.

“There's a lot of a lot of money at stake and pride," McEnroe said.