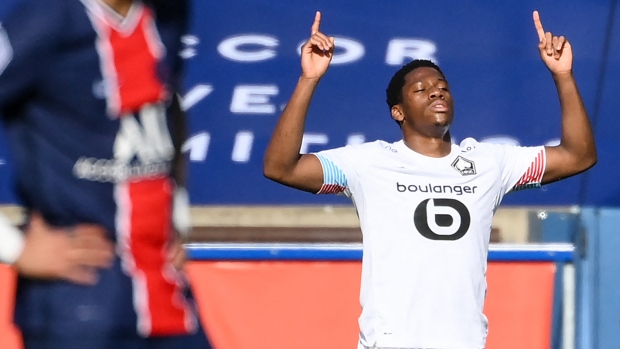 If Lille is looking to sell Canadian Jonathan David to raise funds because of the club’s financial challenges, Liverpool of the English Premier League has the 21-year-old high on their list of potential strikers, according to a report by TSN’s Matthew Scianitti.

English sources tell @TSN_Sports, if Lille look to sell Canadian striker Jonathan David to raise funds because of the club’s financial challenges, Liverpool has David very high on the team’s list of potential strikers. Liverpool has long kept tabs on the Canadian’s development.

The report states that Liverpool has long been keeping tabs on David’s development.

David set the record with the most goals by a Canadian in the Top-5 European league last season when he found the net 13 times to help Lille beat Paris Saint-Germain to the Ligue 1 title.

The championship was the fourth French title for Lille and first since 2011. PSG topped the league seven of the last eight seasons.

The Ottawa product joined Lille from KAA Gent in the Belgian league last August for $46.5 million Canadian, a record transfer fee for a Canadian player.

David has 15 goals in 16 appearances for the Canadian national men’s soccer team.

He was named Canadian Player of the Year alongside Ashley Lawrence in 2019.