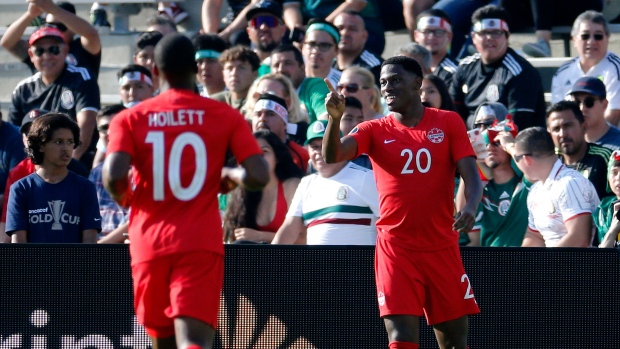 The talented 19-year-old forward took the first step towards that goal by scoring twice in his CONCACAF Gold Cup debut, helping Canada to a 4-0 win over Martinique in the Group A opener at the Rose Bowl on Saturday.

Junior Hoilett and Scott Arfield also scored, as Canada got its the largest margin of victory in a Gold Cup match. It was just the second time Canada scored four goals in the biennial tournament, the other coming in a 4-2 win over French Guiana in the 2017 opener.

"We have young players, good players playing at good clubs so it's an exciting moment for Canada, and just trying to make the most of it when we can," David said.

David, who emerged for Kaa Gent in the Belgian First Division this past season by scoring 12 goals in 33 league matches, has been just as prolific for Canada by scoring six goals in his first five matches with the senior national team.

That form had Canada head coach John Herdman believing David was "under the radar" coming into the Gold Cup, but it didn't take long for him to emerge in his first major international tournament.

David showed his prowess when capitalizing on a mistake by Martinique as it tried to build out from the back to put Canada ahead 1-0 in the 33rd minute. Daniel Herelle could not control a pass from goalkeeper Loic Chauvet and David collected the loose ball before calmly scoring into the left corner after charging in on goal and forcing Chauvet down to one knee.

"He's like an iceman," Herdman said. "He's able to slow it right down in the box, wait for the keeper to sit down, and pick his moments. That's a real special quality in a striker."

David made it 2-0 in the 53rd minute. Kept onside by midfielder Karl Vitulin, David was able to collect a long ball over the top from Samuel Piette and score on a breakaway.

"It's great to have a striker like that, and he's clinical in those moments because those chances can change games," defender Mark-Anthony Kaye said.

Hoilett extended the lead to 3-0 in the 63rd minute off a cross from David to the far post. Hoilett's initial shot was saved by Chauvet, but the rebound struck Hoilett in the knee and went in for his sixth international goal.

Arfield got the final goal in the 67th minute on a shot from outside the penalty box into the far right corner.

Herdman said the willingness to keep attacking reflects a change in Canadian soccer, which has won six consecutive matches in all competitions and outscored opponents 27-1 in that span. Herdman wants to carry that positive approach into the match against Mexico in Denver on Wednesday.

"I think the Canadian DNA in these matches has been typically to defend," Herdman said. "We've got a little bit more about us now, so the players are excited for this game."

However, such aggression comes with risk, as Martinique was able to create several dangerous chances.

Goalkeeper Milan Borjan had to make two timely saves late in first half, including stopping a shot with his feet in the 44th minute when Kevin Parsemain, Martinique's all-time leader in goals, accelerated past the Canadian defence for a breakaway. The Red Star Belgrade keeper parried away another chance by Parsemain in stoppage time after he picked off a poor pass by Piette.

Herdman is willing to accept the tradeoff when it produces the quality of soccer Canada played in its first-ever win against Martinique in three Gold Cup group stage matches. It could also represent a good omen for Canada, which failed to advance to the knockout stage the previous two times it played Martinique in the group stage.

"Just to see us play the way we played, at times there was some real quality, and just as a football fan, not just the coach, enjoyed watching the boys go out there and express themselves," Herdman said.

Canadian players were upbeat about the upcoming match against Mexico, which has won three of the past five Gold Cups. Herdman is even keeping an eye towards a possible rematch with El Tri in the semifinals, the kind of optimism Canada has rarely created in the past.

"That's what we're trying to do," David said.

"We're trying to take Canada somewhere it's never been in a long time and that's what we are working for every day."