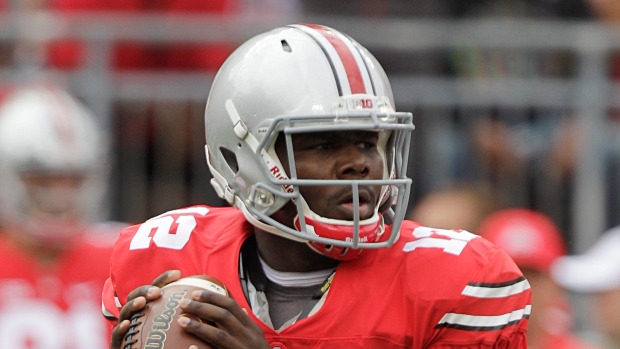 Jones came through with an effective, although sometimes erratic, performance in throwing two touchdown passes and leading No. 1 Ohio State to a 38-12 victory over Western Michigan on Saturday.

Coach Urban Meyer said earlier this week that Jones was his starter despite two subpar performances that led to the quarterback's benching against Northern Illinois on Sept. 16.

Jones was 19 of 33 for 288 yards, but hit only 6 of 14 in the second half when he threw his only interception. J.T. Barrett, who replaced Jones against Northern Illinois, came on in the final 6:34 and threw an interception on his first drive.

"Overall, I thought Cardale played okay," Ohio State coach Urban Meyer said. "He threw for 288. I still give him the okay because we have high expectations."

Jones started strong for the Buckeyes (4-0), who won their 17th straight game. He threw a 38-yard TD pass to Michael Thomas on Ohio State's first series and added a 37-yard scoring pass to Jalin Marshall early in the second.

But he was called for intentional grounding at the Western Michigan 15 with 8 seconds left in the second quarter. The penalty brought an automatic 10-second runoff to end the half with OSU up 24-6.

Jones was also short on several long passes, one in the third quarter to Marshall in the end zone that resulted in an interception by Darius Phillips.

"The alarming part is the underthrown deep ball, which is fixable," Meyer said. "It's not fixable when you don't have wideouts that can stretch a field. But we do."

The good news for the Buckeyes was at least Jones was trying to go deep. With the graduation of Devin Smith, Jones' favourite target last season, there hasn't been a suitable replacement.

Jones was able to buy time in the pocket on several occasions and hit Thomas once for a 40-yard gain, a sign that Jones might be regaining his confidence. He missed several wide open receivers and forced a few throws.

"I definitely felt more comfortable," Jones said. "We're starting to get on the same page as not just receivers or offensive line or things like that. I think everyone felt way more comfortable today."

His uneven play was mirrored by the usually stout Ohio State defence, which scored for the third straight game when tackle Adolphus Washington rumbled 20 yards after intercepting Broncos quarterback Zach Terrell in the second quarter.

Western Michigan (1-3) moved the ball well in the first half, rolling up 232 yards. But penalties left the Broncos with no points on two sustained drives before they scored with 8:19 to go on a Terrell to Daniel Braverman 55-yarder to make it 14-6.