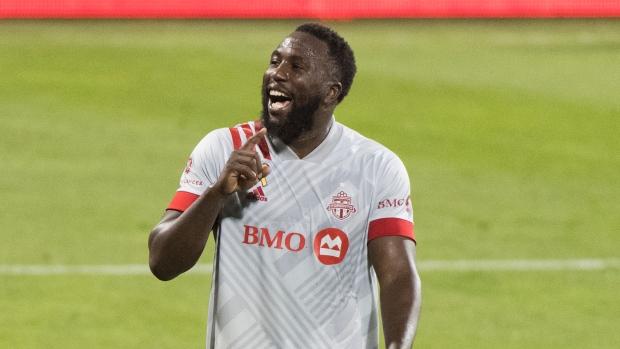 MONTREAL — Greg Vanney wanted Toronto FC to play Wednesday night's game as if it were a cup final, and that's exactly the performance he got from Jozy Altidore.

The powerful striker scored in the 89th minute on his seventh shot on target, helping Toronto FC snap a two-game losing skid with an important 2-1 victory over the Montreal Impact.

The win gave Toronto (6-2-3) a considerable chance of hoisting the Voyageurs Cup, awarded each year to the winner of the Canadian Championship. The victor also earns a spot in the CONCACAF Champions League.

"He's very focused on getting the goal. He wants to make a difference," the coach said. "In big games, more times than not, he's been able to put one or two on the board."

A 1-1 draw between Montreal and Toronto seemed imminent late in the game when a poor free kick by Rudy Camacho went straight to Nick DeLeon. The TFC midfielder lobbed a ball to Altidore, who silenced the small crowd with a shot between Clement Diop's legs for his first tally of the season.

"It was a simple mistake and we have to learn from our mistakes if we want to win ball games," said Impact coach Thierry Henry.

The victory means Toronto are in the driver's seat for a chance to advance in the Canadian Championship. Vanney's men finished 4-2-0 (12 points) in the round-robin portion of the tournament. The top team will face the winner of the Canadian Premier League's Island Games.

"That's a game that we cannot let slip away like that," said Impact midfielder Samuel Piette. "A tie would have been very good for us in terms of finishing top in this tournament against the Canadian teams."

Wednesday was the last scheduled game for TFC, who now have to wait and watch while the Vancouver Whitecaps host Montreal at BC Place on Sept. 13 and 16 to determine which team advances in the tournament. The Impact's only hope is to win both games by a large enough margin to beat Toronto in goals.

TFC's victory Wednesday means Vancouver can no longer move on to the finals.

"The goal was to come here and win the game," said Vanney. "We wanted that extra push and you saw at the end, we put in an extra forward in Ayo (Akinola). We pushed to try to get the win. We felt that was important.

"That's probably not something you would do in a regular-season game on the road."

Prior to kickoff, all players kneeled during the Canadian national anthem and during a moment of silence to show solidarity with anti-racism movements. Toronto defender Justin Morrow, head of the group Black Players for Change, raised his fist.

An exciting and fast-paced first half saw Montreal (4-4-1) move the ball very well through the midfield and nearly take the lead on three separate chances by Saphir Taider in the opening half hour.

But it was Richie Laryea, back in Vanney's starting 11 after missing three games with an ankle injury, who orchestrated the game's first goal in the 32nd minute.

Against the run of play, goalkeeper Quentin Westberg cleared the ball to Laryea in his own half. The speedy midfielder darted across midfield, picked up speed and blew past a helpless Luis Binks down the left flank. He then sent the ball across the six-yard area to an unmarked Pablo Piatti, who scored easily.

"It's a good feeling to get a win we deserved," said Laryea. "We left it all on the line for this game. We'll see what happens moving forward."

Though a couple hundred fans watched from the stands, supporters outside Montreal's Saputo Stadium provided the ambience by lighting flares and setting off firecrackers.

They were rewarded in the 53rd minute when Victor Wanyama scored his first MLS goal — all alone in the box due to poor marking by TFC — by heading home a Romell Quioto free kick, which was first deflected by Binks in the box.

The goal was initially not given for an offside on Binks, but a video review overturned the referee's decision on the field. Toronto has conceded a set-piece goal in three consecutive games.

Quioto thought he scored twice in the game — in the 35th and 79th minutes — but was called offside both times.

NOTES: Toronto fired 10 shots on target. … Michael Bradley (knee) did not play. … TFC have beaten Montreal in three of the last four meetings.

This report by The Canadian Press was first published Sept. 9, 2020.