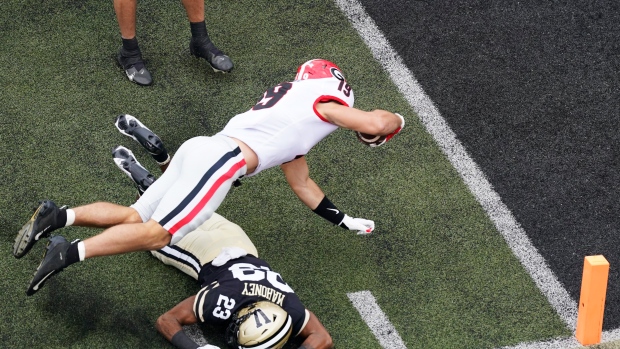 NASHVILLE, Tenn. (AP) — JT Daniels threw for 121 yards and two touchdowns playing only the first quarter as No. 2 Georgia dominated Vanderbilt 62-0 Saturday in the Bulldogs’ biggest win in a series that started in 1893.

This game was effectively over when Georgia (4-0, 2-0 Southeastern Conference) led 35-0 after the first quarter. The Bulldogs started three of four drives in Vandy territory. They recovered a fumble on a kickoff to set up one TD, then Christopher Smith intercepted a pass to set up a second TD less than 30 seconds later.

Bulldogs’ fans turned this into their home away from Sanford Stadium with Georgia red even in seats behind the Vanderbilt bench. They got to watch the Bulldogs post their first shutout this season, forcing Vandy three-and-out nine times.

Vanderbilt (1-3, 0-1) lost its fourth straight to Georgia and its 14th straight SEC game, a skid that could be longer if COVID issues hadn’t forced Vandy to cancel its visit on Georgia’s Senior Day last season. A program that won in Athens in 2016 showed how much rebuilding first-year coach Clark Lea faces.

Tight end Brock Bowers started the scoring with a 12-yard run on an end around with 11:21 left in the opening quarter. Daniels threw a pass to Bowers, who finished off a 25-yard TD. Zamir White scored two plays after James Ziglor fumbled the kickoff, and Daniels hit Ladd McConkey for a 12-yard TD after the interception.

Georgia actually had to drive 71 yards on its final scoring drive of the first quarter, and Ladd McConkey ran 24 yards for the TD.

Coach Kirby Smart pulled Daniels, who is now 7-0 as a starter, after the first quarter. Stetson Bennett finally drove the Bulldogs to points on his third drive with Jack Podlesny kicking a 31-yard field goal just before halftime for a 38-0 lead.

Georgia: Smart was able to smother Vanderbilt almost literally. Bennett finished with 151 yards and a TD as the backup quarterback. Nine different Bulldogs had at least one rush, while nine different Bulldogs caught at least one pass. ... Bowers became the first Bulldogs’ player to run for a TD and catch a TD pass in the same game since Todd Gurley did it against Florida in 2013. He later caught a 29-yard pass from Bennett in the third quarter for his third TD of the game.

Vanderbilt: The Commodores did have some moments in a game where they didn’t get their first first down until 2:23 remained in the first quarter. The defense turned Georgia over on downs late in the first half, stopping James Cook for no gain on fourth-and-1 at the Vandy 3. Ethan Barr got the interception off a breakup by Jaylen Mahoney.