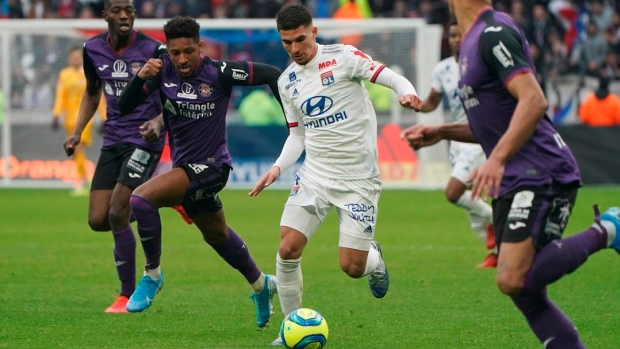 The finest midfielder to have played for the French club, Juninho scored a staggering 44 goals from free kicks from all sorts of improbable angles and distances.

He also starred in the team that beat Real Madrid 3-0 in 2005 during the period that the club reached three straight Champions League quarterfinals and won seven straight French titles.

Now, the 45-year-old Brazilian — adored by Lyon fans who still call him “Juni” — is the club's sporting director. And he's trying to instil the drive he had as a player into this team.

The first step is turning Lyon into a force at home. The team has dropped far too many points at Groupama Stadium and is seventh in the French league, seven points from third-place Rennes and next season's Champions League qualifying rounds.

Lyon's erratic form is doubly frustrating because the players excelled in the Champions League on Wednesday, beating 35-time Italian champion Juventus 1-0 in the first leg of the last 16.

Determination, concentration, discipline, physicality. All the right ingredients were there in a high-octane, impressive performance few predicted.

Juninho used the victory to further motivate his players.

“I told them: ‘This is our home, you have to make the most of it. You must have courage and confidence,'" he said. “We’re the ones who send messages to the supporters. If they see we’re aggressive, then they get behind us.”

Lyon's inconsistency is linked to its own success.

A prolifc youth academy, considered among the best in Europe, produces players good enough for the top French division when they're very young.

Lyon's scorer against Juventus was 22-year-old midfielder Lucas Tousart, sold to Bundesliga club Hertha Berlin last month but loaned back for the rest of this season.

Setting him up was Houssem Aouar. He is a fleet-footed and hugely skilled 21-year-old attacking midfielder with an eye for goal, described as “brilliant” by Manchester City manager Pep Guardiola last season.

On the bench against Juventus was 20-year-old midfielder Maxence Caqueret, another local found by the club's multi-pronged regional scouting network. Waiting in the wings is a prodigy in the making: 16-year-old forward Rayan Cherki.

Cherki is arguably the academy's best talent since Karim Benzema, who joined Real Madrid in 2009. In a 4-3 win against Nantes in the French Cup, Cherki scored two goals, made two more and won a penalty in an astonishingly accomplished performance for his age.

But its because their talent is so evident, and quickly rewarded by a place in the team, that players have sometimes lacked humility. Lyon seems merely a stepping stone to greater things.

Having already been fast-tracked in France, they know that the eager eyes of City and other big European clubs are on them. Former homegrown players like Benzema and Alexandre Lacazette were sold to Madrid and Arsenal for significant fees.

The casual attitude of “we're too good for Lyon” is something Juninho wants to stamp out fast.

“It’s a young team who aren’t hungry enough. But in cup games, when they have to raise their level of concentration, they play like this," he told match broadcaster RMC Sport after Wednesday's game. ”The question is: Why we can’t do this in the league? When you’re playing at home, you have to have energy, you have to be willing. That’s what we must show the fans.”

Juninho, who scored nearly 80 goals for Brazilian club Vasco da Gama and made 40 international appearances for his country's national team, knows that homegrown talent alone is not enough to build a successful team.

So he has used his influence back home. Last month, Lyon signed 22-year-old Bruno Guimarães, a holding midfielder who spent some of his youth career with Vasco.

“He sees things clearly and almost never loses the ball. You can give it to him to speed up the game, or pass it wide. He also cuts out a lot of passes," Juninho said. “He’s a young player who was very well coached in Brazil. He always wants to learn, and he sees things before others.”

Guimarães in on Brazil's Olympic team and Juninho — who played alongside Golden Ball winners Ronaldinho and Kaka at the 2006 World Cup — expects him to make the senior team.

“All the big clubs have a player like that in front of the defence, one who changes the rhythm throughout the game,” he said. “He has the ability to become a very, very good player. Scouts from Brazil were watching him tonight.”