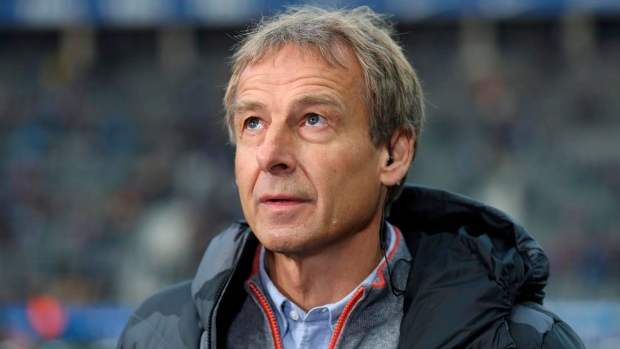 FRANKFURT — Jürgen Klinsmann claimed his first point since returning to coaching as his Hertha Berlin team let slip a two-goal lead to draw with Frankfurt 2-2 in the Bundesliga on Friday.

Hertha was clinging to a 2-1 lead in the 86th minute when Sebastian Rode hammered the ball in from a corner for Frankfurt to deny the Berlin team the win.

Hertha is in the relegation playoff spot in 16th and winless in its last six league games, while Frankfurt is 10th.

Dodi Lukebakio gave Hertha the lead with a shot through Frederik Rönnow's legs. That goal was assisted by Marko Grujic, who later made it 2-0 with a header from a free kick.

However, Frankfurt almost immediately replied with a header of its own from Martin Hinteregger, the Austrian defender with five Bundesliga goals.

Frankfurt's fans expressed their disapproval of the video assistant referee after it ruled out two goals for the hosts. There was a rare disallowed own goal when Hertha goalkeeper Thomas Kraft palmed a cross into his own net but was found to have been pushed while jumping.

Klinsmann took over Hertha last week on a temporary deal until the end of the season, after Ante Covic was fired with the team under threat of relegation. Klinsmann hadn't coached since being fired in 2016 by the United States, and last worked at a club in 2009 at Bayern Munich.

Frankfurt has won just one of its last six games in all competitions, against Arsenal in the Europa League which led to Unai Emery being fired as Arsenal coach.