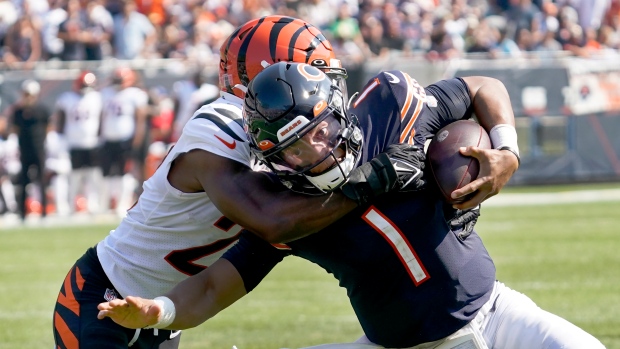 CHICAGO (AP) — Justin Fields got his first extended look as a pro. And it might be a long-term arrangement.

Fields played the second half after Andy Dalton exited with a knee injury against his former team, and the rookie quarterback used Chicago's stellar defensive performance to direct the Bears to a 20-17 victory over Joe Burrow and the Cincinnati Bengals on Sunday.

Roquan Smith returned an interception 53 yards for his first career touchdown, one of three straight picks thrown by Burrow and four consecutive takeaways for the Bears during the decisive stretch in their first win of the season.

Fields took over on Chicago’s final drive of the second quarter after getting in on a handful of plays prior to that. But the biggest key for the Bears was the defense bouncing back after it was picked apart by Matthew Stafford in a season-opening loss at the Los Angeles Rams.

“I don't think I'm pleased with how I played at all,” Fields said after throwing for 60 yards. “I think there's a lot more in me that I have to show. I know there's gonna come a time. I know it's not gonna happen overnight, so I'm just gonna keep grinding. No matter what happens, I know I'm meant for this. I'm meant to be here.”

Dalton was hurt on a 14-yard run early in the second quarter. Fields took the final three snaps of that possession.

Dalton was in for the next drive, before Fields led Chicago's final one of the half. Dalton took some warmup throws at halftime, but did not return to the game.

Coach Matt Nagy said Dalton was available in an emergency. He also said he was “pretty sure” Dalton did not have a serious ACL injury, though the quarterback was to be examined more in the next few days.

But would Dalton start if he's able or Fields?

“I'm not gonna get into any of that,” Nagy said.

The Bears were up 20-3 before Burrow threw a 42-yard touchdown pass to Ja’Marr Chase. Fields then got intercepted at the Chicago 25 by Logan Wilson, who returned it to the 7. Burrow hit Tee Higgins for a 7-yard TD on the next play, cutting it to 20-17 with 3:39 remaining. But the Bears hung on for their third straight win over Cincinnati (1-1).

Fields, who was in on five plays in the opener, completed just 6 of 13 passes. The No. 11 overall draft pick also ran for 31 yards.

“I'm just anxious to see what I messed up on and what I have to do better," Fields said. “I didn't play well in my eyes.”

If he's the starter?

Dalton, facing his former team for the second time in as many seasons, threw a touchdown pass to Allen Robinson. The three-time Pro Bowler, who led Dallas to a victory at Cincinnati last year, completed 9 of 11 passes for 56 yards.

Robinson caught his 40th career TD when he hauled in an 11-yarder on the game’s opening possession.

Robert Quinn had one of Chicago's four sacks, giving him 1 1/2 on the season. He had just two last year.

Burrow never threw more than one interception in his first 11 outings as a pro, and his high in 38 games for Ohio State and LSU was two. He threw three in this one.

“That’s just me trying to force the ball trying to get something going,” he said. "You learned a lesson today that when your defense is playing as good as they are, you don’t have to force those balls. You kind of just let the game come to you."

The Bears (1-1) led 10-3 after Cairo Santos kicked a 28-yard field goal in the opening seconds of the fourth quarter that was set up by Tashaun Gipson’s fumble recovery.

Smith made it a 14-point game when he leaped to haul in a short pass intended for Tyler Boyd at the 47 and returned up the left sideline.

Jaylon Johnson got his first career interception on Cincinnati’s next possession. After Chicago punted, Angelo Blackson got his first as a pro deep in Bengals territory on a ball that teammate Alec Ogletree deflected. That led to another field goal for Santos, making it 20-3.

“I think that in our first week we didn’t have the type of performance that we wanted,” defensive tackle Akiem Hicks said. “And throughout the week, there was an emphasis in order to bring those characteristics — energy, passion, playing hard throughout the snap, having those things as messages during the week. And just before the game, we reminded ourselves of this is what we want our defense to look like. Then, we came out and showed it today.”

Bears: NT Eddie Goldman (knee) was inactive after missing the opener. He opted out of last season because of COVID-19 concerns.