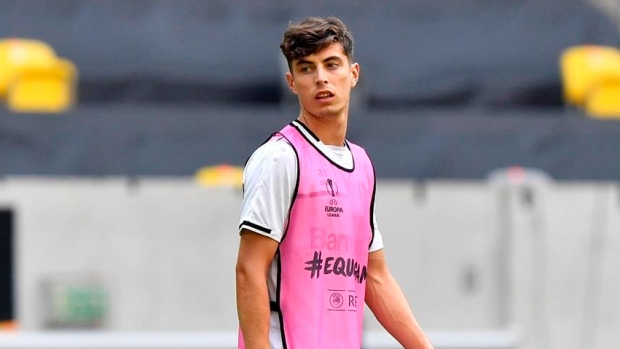 Chelsea took its spending spree on new players to more than $250 million ahead of the new season by signing highly rated Germany attacking midfielder Kai Havertz from Bayer Leverkusen on Friday.

The 21-year-old Havertz, who is one of the great young hopes of German football, moved for a fee that reportedly will rise to a maximum of 70 million pounds ($92 million) and will form part of Chelsea’s new-look attack that also includes fellow new signings Timo Werner and Hakim Ziyech.

With England left back Ben Chilwell and Brazil centre back Thiago Silva also joining the London club in the off-season, manager Frank Lampard is going into the 2020-21 campaign starting Sept. 12 having changed half his team.

Havertz is arguably the most exciting transfer of them all.

A left-footed player who is at home as an attacking midfielder or as a central forward, Havertz was Leverkusen’s top scorer last season with 17 goals in all competitions.

In the Bundesliga, he has scored 36 goals in 118 games. He was the youngest player to reach 100 Bundesliga appearances.

Lampard, a freescoring attacking midfielder like Havertz as a player most notably for Chelsea and England, will hope his remoulded attack can help the team challenge Liverpool and Manchester City for the Premier League title in his second season in charge.

“Kai is one of the best players of his age in world football, so we are very happy that his future lies at Chelsea," the club's director Marina Granovskaia said.

“He has proven pedigree in one of the best leagues in Europe, he plays for the German national side and he is an exciting, dynamic talent. We are delighted to be able to add his versatility and quality to the squad before the season begins.”

Lampard leaned on Chelsea’s homegrown talent, like Tammy Abraham and Mason Mount, in his first year as manager but the team stumbled in the second half of the season and only qualified for the Champions League on the final day of the season.

Havertz made his breakthrough aged 17. He started the 2016-17 season with Leverkusen’s under-19 team and was 17 years, 4 months old when he made his first senior appearance as a substitute.

“He’s an excellent footballer with outstanding technique, fast, robust in challenges, a good header of the ball,” then-Leverkusen coach Roger Schmidt said after Havertz broke into the team.

Havertz is developing into a complete player. He has composure on the ball, technical skill, the perception to anticipate teammates’ movement and ability to then play the ball where they want it.

In the second half of last season, the tall Havertz showed his versatility by playing as striker for Leverkusen following injuries to Kevin Volland and Lucas Alario.

But it is in midfield where Lampard is likely to deploy Havertz to give the team some creativity in central attacking areas, something it lacked last season.

Havertz last played for Leverkusen in the quarterfinals of the Europa League on Aug. 10, scoring in a 2-1 loss to Inter Milan.

His first game for Chelsea could come in its Premier League opener at Brighton on Sept. 14.