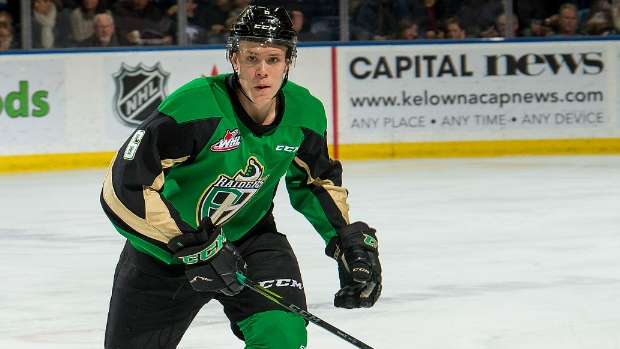 Prince Albert Raiders defenceman Kaiden Guhle has received some inside information from his big brother as he navigates his National Hockey League draft year. Brendan Guhle, who split this season between the Anaheim Ducks and the AHL's San Diego Gulls, went through this process five years ago.

"He has an idea of which teams will give me tough questions so he gets me prepared for that," Kaiden noted. "Now that I'm doing all these interviews and Zoom calls with teams he just tells me to be myself. That's the best advice he's given me, because teams are going to want to pick me because of the type of person I am."

The Guhle brothers, reunited at home in Sherwood Park, Alta., during the COVID-19 pandemic, are bot​h defencemen and Brendan also played in Prince Albert. Due to the age gap, however, there wasn't much of a sibling rivalry.

"I'm not sure it was much of a rivalry for him, because he'd just beat me up all the time," Kaiden recalled with a grin. "I was so much smaller than him when he was living at home so I'd have to find some pretty nasty ways to try and beat him, try and be a little bit dirty. He would never really take it easy on me, which is good. He'd always try to prepare me for things in life. It was always good competition. We're both competitive guys, but it was all for fun."

Those brotherly battles helped shape the player Kaiden is now. He models his game after Los Angeles King Drew Doughty, who has been known to agitate folks in Alberta of late.

"Being an Oilers fan, I watch him quite a bit," Kaiden said. "They play Edmonton quite a bit so I watch him as much as I can. We kind of play a similar style of game. He's a very gritty player, very competitive, very chippy so that's my style of game. I try and get under the skin of the best players and shut them down and that's one of the biggest parts of his game. I try and do that as much as I can."

Today is a happy day for our family#proudmamma#proudbrother#congrats honey. I love you both 💗❤️🎉 pic.twitter.com/yXdrEnmAl1

And while Kaiden may have lost out in many of their childhood games, he's poised to earn draft bragging rights over Brendan, a second round selection, 51st overall, by the Buffalo Sabres in 2015. Kaiden is No. 8 on NHL Central Scouting's final list of North American skaters. He is the also the top-ranked player from the Western Hockey League.

The 18-year-old spoke with TSN via Zoom this week and reflected on the pressure of being a top pick in the WHL draft and described what he learned from winning a lea​gue championship with the Raiders last season. The following is an edited transcript of the interview.

How are you and Brendan similar on the ice and how are you different?

"The biggest similarity is our skating. I don't know what it is, maybe genes, but we're blessed to be good skaters. Obviously, you got to practice skating, but I think some of it could be genes. The biggest difference is how we play. He's a lot more offensive than I am and he's always been that way throughout junior and minor hockey. I had to change my game a little bit. I was a lot more offensive in minor hockey and once we got to junior I switched my role a little bit. I'm still offensive, but I really took on the defensive game and added more physicality. So, he's offensive-minded and I'm more of a stay-at-home player."

How did you develop that skating skill?

"​Me and Brendan did power skating lots when we were younger. We were in skating lessons for two years even before we started playing hockey so that was big for us. I watched Brendan skate a lot before I did so I got a feel for it and got to learn from him."

You posted 40 points in 64 games this season, which is an increase of 23 points over last season. Did you improve offensively?

"I think I did, but also we lost a lot of players from last year, which created a little more opportunity and that helps, you know, playing more minutes and on special teams. But, yeah, I worked with some different people in the summer and branched out a little bit and they helped out with my offensive game and offensive mind."

Who did you work with and how did they help?

"I worked with Kyle Tapp and that was my first summer working with him. He's out in Lloydminster and he came to Edmonton twice a week and we went to Lloyd a couple times and he was really good. He works with Ty Smith and Kale Clague and those guys and some highly-touted players."

What did you do better specifically on offence this season?

I'm really starting to warm up on Kaiden Guhle . I thought he was really limited offensively but I'm starting to see some very impressive flashes. He's improving pretty quickly 👍 pic.twitter.com/7gISS3Dr8B

You had a big night at the CHL/NHL Top Prospects Game in January scoring a goal and competing all over the ice. What did you do well that night?

"My competitiveness is what I liked most about that game. I could've scored or not scored, but I still would've been happy with how I played in that game."

Dealing with pressure is a big part of success, how did you deal with the expectations of being the No. 1 pick in the 2017 WHL draft?

"It was obviously a big honour and Prince Albert has such a good hockey history. My brother went through there before me so it's where I wanted to be and where I wanted to play my junior career. The pressure didn't really get to me. I think pressure is fun and it's what you're going to have to deal with your whole hockey career so you just get used it. The pressure wasn't too big of a deal."

What did you learn during that run to the WHL title in 2019?

"It was unreal. All those guys on that team, they wanted to win so bad. Something I'm going to remember for the rest of my life is that Game 7 overtime winner, that was an awesome experience and I was so fortunate to go through that at such a young age. The Memorial Cup was awesome also, honestly. Unfortunately we didn't get the result we wanted, but it was a great experience getting to see great players from all over the country and all over the world."

How would you describe what it's like to play in overtime of a Game 7 with a league title on the line?

"It was very nerve-wracking. I mean, you just don't want to make a big mistake to lose the game and it's do or die at that point. So, you play a little more safe and not too much jumping up in the rush, just staying back. It was nerve-wracking but fun, too. I never got to experience that kind of thing before."

What do you remember about the moment the winning goal went in?

"Nothing. Honestly, nothing. I just blacked out and everyone was screaming and yelling. I blacked out at that time. Just a crazy moment."

Another big moment will be when you get drafted, what's it like waiting?

"You kind of want to get it over with. It's pretty stressful going through it the whole year and now you just want to see what team you go to or whatever. But right now is bigger than hockey and so it's just about trying to keep everybody safe and waiting for the NHL season to end. Sometimes it sucks a little bit, but you just have to wait it out and everyone's in the same boat so you can’t complain too much."