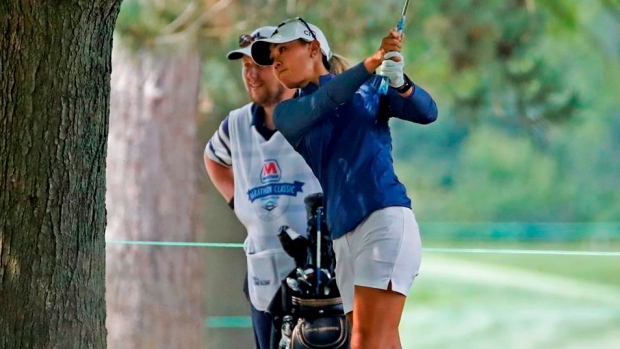 SYLVANIA, Ohio — Danielle Kang had a careless three-putt bogey when she could least afford it, leaving her five shots behind Lydia Ko with six holes to play Sunday in the Marathon Classic.

She said to her caddie, “Man, that's too costly.” He told her she had six holes left.

“It gave me hope,” Kang said. “Sometimes when you're that far behind, you feel like you have to do a lot to get to that end.”

Kang delivered a stunning rally without having to do nearly as much as she might have thought, mainly because of a collapse by Ko that was equally shocking, especially the double bogey on the par-5 closing hole at Highland Meadows.

Kang followed her late bogey with two straight birdies, and four closing pars for a 3-under 68 that was enough for a one-shot victory and her second straight win in Ohio.

Ko was poised to end two years and 44 tournaments without a victory. She made bogey on the 14th hole, and with Kang's birdies, the lead suddenly was down to two. Ko dropped another shot on the 16th, and caught a break when Kang was in position for birdie on the par-5 17th and had to settle for par.

But on the closing par 5, Ko fell apart. She hit her chip through the green. With a slightly uphill lie in patchy rough, Ko muffed the chip and watched it roll into a bunker. She blasted that out to 10 feet and missed the putt that would have forced a playoff. She wound up with a 73.

Jodi Ewart Shadoff, in contention for the second straight week but still without an LPGA victory, played bogey-free after the opening hole for a 67. She wound up in a tie for second with Ko.

Ko reached No. 1 in the world as a teenager and now is outside the top 50. Her back had been troubling her all week, but this appeared to be more about nerves. She also caught a dicey lie for her third shot on the 18th, sending it over the green. Then, she failed to hit her chip hard enough from the fluffy lie in the rough.

Kang finished at 15-under 269 in winning for the fifth time in her LPGA Tour career. The two-time U.S. Women's Amateur champion won last week when the LPGA Tour resumed its schedule at tough Inverness Club in nearby Toledo, site of next year's Solheim Cup.

Now, Kang is a back-to-back winner and has established herself as the top American player, with sights set on No. 1.

“I've been playing really great consistently before and after quarantine,” Kang said. “I think a big part of how I’ve approached the golf game is I’m really not focused on a lot of other things other than just getting better at things I want to get better at. We always have room to improve, and that’s the beauty of golf.”

Minjee Lee finished eagle-birdie for a 68 to finish alone in fourth.

The LPGA Tour, which resumed after six months because of the pandemic, now heads to Scotland for two weeks for the Ladies Scottish Open and the Women's British Open.