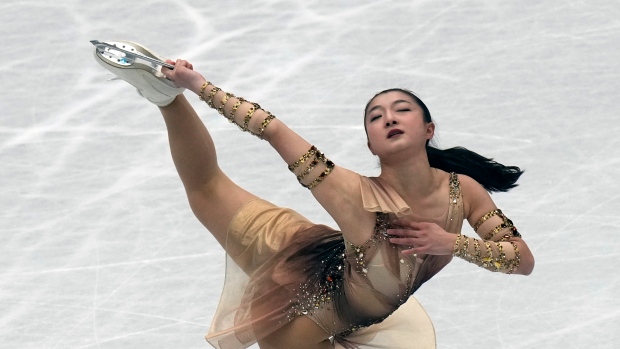 MONTPELLIER, France — Canada's Vanessa James and Eric Radford were fifth in the pairs short program on Wednesday in what could be their one and only world figure skating championships together.

James, from Toronto, and Radford, from Balmertown, Ont., who came out of retirement last April to compete together, opened with a perfect triple twist that set the tone for a score of 66.54 points.

Alexa Knierim and Brandon Frazier are the leaders with 76.88, while American teammates Ashley Cain-Gribble and Timothy Leduc scored 75.85 for second. Japan's Riku Miura and Ryuichi Kihara of Japan are third (71.58).

James, who's 34, and Radford, who's 37, were 12th at last month's Olympics, where Radford was the oldest skater competing. The two are undecided whether they'll retire after the worlds.

Evelyn Walsh of London, Ont., and Trennt Michaud of Trenton, Ont., were eighth in the short program.

The pairs event is missing the top five finishers from the Beijing Games. That's because along with the silver- and bronze-winning Russian teams, gold medallists Sui Wenjing and Han Cong and Chinese teammates Peng Cheng and Jin Yang are also absent from worlds.

Sakamoto's program, set to music from the film "Gladiator," featured a triple flip-triple toe loop and earned huge component marks for a score of 80.32 points. That was more than five points clear of Hendrickx, who was seventh at the Beijing Games last month, and nearly eight points ahead of Bell, who finished 11th at the Olympics.

Sakamoto broke up a Russian sweep of the podium in Beijing with her bronze medal. But none of her rivals — gold medallist Anna Shcherbakova, silver medallist Alexandra Trusova and fourth-place finisher Kamila Valieva — is allowed at worlds, with Russian athletes barred from international competition following the invasion of Ukraine.

Valieva is among several Russian skaters performing in an exhibition in Saransk this weekend.

You Young of South Korea was fourth after her short program. U.S. skater Alysa Liu was in fifth place.

The 19-year-old opened with a triple lutz-triple toe-loop combination, then landed a triple loop and double axel.

"I'm happy with my skate after and up and down kind of week,’" said Schizas. ‘"It was a strong performance, and I showed a lot of resilience."

Schizas was 19th in her Olympic debut in Beijing, and helped Canada to a fourth-place finish in the team event — and potentially a bronze medal pending an investigation of the Russian gold medallists after a positive doping test by 15-year-old Kamila Valieva.

Competition continues Thursday with the men’s short program and the pairs free skate.