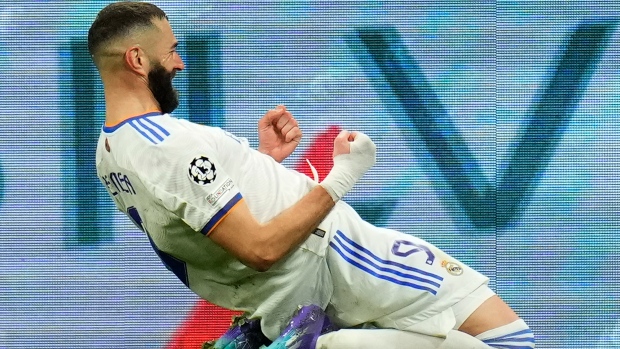 Benzema responded to another goal by Mbappé by scoring a hat trick in less than 20 minutes in the second half Wednesday as Madrid came from behind to defeat Paris Saint-Germain 3-1 and advance to the quarterfinals of the Champions League.

It was yet another frustrating result in Europe for PSG, which won the first leg 1-0 and doubled its advantage through Mbappé in the first half but again failed to live up to the massive expectations after adding Lionel Messi to its star-studded team this season.

“It turned out to be a spectacular night for us,” Madrid coach Carlo Ancelotti said. “It was a difficult match and it got even more complicated after their first goal. We suffered a lot. But after we scored the atmosphere in the stadium changed and the fans began to push us again and the players began to believe that they could finish the comeback.”

Mbappé opened the scoring in the 39th minute to increase PSG's aggregate lead after the France striker also netted in stoppage time to secure the first-leg win in Paris.

Mbappé has been widely linked with a move to Madrid after his contract expires at the end of the season and was cheered by part of the Madrid fans when his name was announced in the PSG lineup before the match. His family was also at the Bernabéu.

But when it was all over the ovation was for Madrid and Benzema, who at 34 years, 80 days became the oldest player to score a Champions League hat trick. He surpassed Olivier Giroud, who was 34 years, 63 days when he hit a treble for Chelsea at Sevilla in 2020.

Benzema also reached 309 goals with Madrid to surpass Alfredo Di Stéfano for third place on the club's all-time scoring list, and 67 in the Champions League to surpass Raúl González's 66 with the club and become second-best to Cristiano Ronaldo.

“We needed the fans and they were behind us until the end,” Benzema said. “This victory is for them.”

More than 60,000 were on hand for the biggest crowd at the Bernabéu since the coronavirus pandemic started. The stadium, which remains under renovation, remained packed several minutes after the final whistle as players stayed on the field celebrating with the fans.

Benzema's third Champions League hat trick started in the 61st after a blunder by PSG goalkeeper Gianluigi Donnarumma. He then scored again in the 76th and 78th minutes to give the 13-time European champions a 3-2 aggregate win. Madrid reached the last eight for the second straight season after consecutive eliminations in the round of 16.

PSG, seeking its first Champions League title, had advanced past the round of 16 the last two seasons, losing the final to Bayern Munich in 2020 and being eliminated by Manchester City in the semifinals in 2021.

In the other last-16 match on Wednesday, Manchester City advanced past Sporting Lisbon 5-0 on aggregate after a scoreless draw in England.

PSG appeared in control after Mbappé, who had been doubtful to play after picking up a knock in training on Monday, scored in the 39th after collecting a long pass by Neymar and making a run into the area before firing a low shot past goalkeeper Thibaut Courtois.

It was the 27th Champions League goal for the 23-year-old France forward with PSG, leaving him three shy of Edinson Cavani’s club record in the competition. He has scored 14 goals in his last 14 Champions League appearances.

Mbappé had already had a few chances before opening the scoring, including a goal disallowed for offside in the build-up. He also had one goal called back for the same reason in the second half.

Vinícius Júnior and Benzema threatened the most for Madrid, and the French striker scored the equalizer off a pass from Vinícius after Donnarumma gave the ball away while being pressured by Benzema inside the area.

“The goalkeeper waited and waited, he lost the ball and it was a goal," Benzema said. "He should have cleared it, simple as that.”

“It was a clear foul and it wasn't called," Pochettino said. “We became nervous after that goal and things got complicated. We didn't manage it well after that.”

Benzema added the second after a pass from Luka Modric and a couple of minutes later sealed the team's spot in the quarterfinals with a one-time finish after another run by Vinícius down the left flank.

Madrid was without Ferland Mendy and Casemiro because of yellow-card suspensions, but Toni Kroos started after being doubtful because of muscle injury. Federico Valverde replaced Casemiro, while Nacho Fernández started at left back instead of veteran Marcelo.