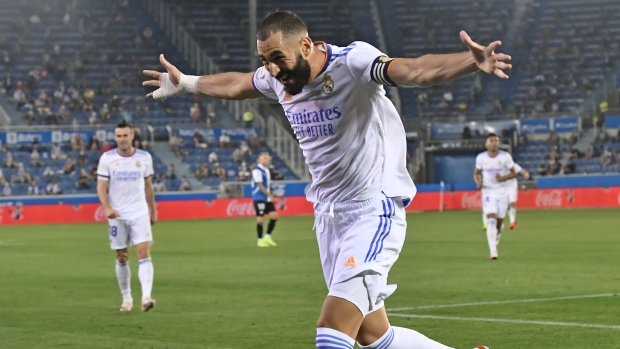 MADRID (AP) — Karim Benzema picked up from where he left off last season, scoring twice to lead Real Madrid to a comfortable 4-1 win over Alavés in its Spanish league opener on Saturday.

Playing again under coach Carlo Ancelotti, Madrid also got a goal from Nacho Fernández, one of the defenders stepping in to replace veteran captain Sergio Ramos, who left after 16 seasons because the club didn’t want to extend his contract.

Benzema, the team’s top player and scoring leader last season under Zinedine Zidane, put Madrid ahead with a shot from inside the area after a clever backheel touch by Eden Hazard in the 48th minute. The France striker added his second from close range in the 62nd, six minutes after Fernández had found the net following a cross from Luka Modric.

Alavés pulled one back with a penalty kick converted by Joselu Mato in the 65th, and Vinícius Júnior completed the scoring with a header two minutes into stoppage time.

The result kept Madrid unbeaten in league openers since 2008. It went without a title last season before Zidane quit and Ancelotti was re-hired. The Italian coach had won four titles with Madrid in his first stint with the club from 2013-15.

About 4,000 fans were at the Mendizorroza Stadium as Spanish health authorities allowed the league to restart with crowds of up to 40% of the venues’ capacity.

It was Madrid’s first of three straight away matches. The team’s first home game is scheduled for September, when it hopes to have the field of the Santiago Bernabéu Stadium ready. The venue is undergoing renovation but will continue hosting matches while construction work goes on.

Central defender David Alaba, who joined from Bayern Munich, played as a left back on Saturday because of the absences of Ferland Mendy and Marcelo. Fernández and Éder Militão, reserves last season, started in the middle of the defense.

Madrid also was without veteran midfielder Toni Kroos because of an injury, with Federico Valverde playing in his position.

Ancelotti’s attack included Benzema, Hazard and Gareth Bale, who returned after a season on loan with Tottenham.

Alfonso Espino scored seven minutes into second-half stoppage time to salvage Cádiz a 1-1 draw against Levante. The visitors had gone ahead with a goal by José Luis Morales in the 39th.

Promoted Mallorca took the lead against Real Betis with a goal by Brian Oliván in the 25th but Juanmi Jiménez equalized for the visitors in the 59th.