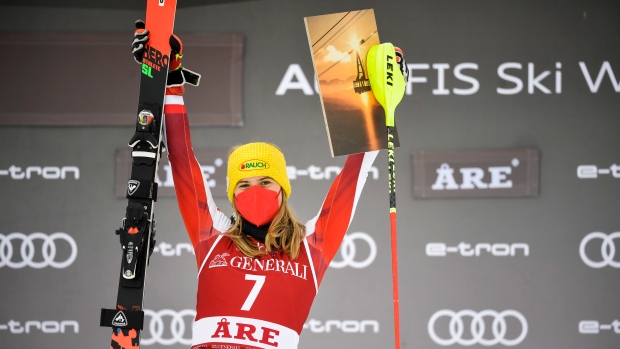 In the last race before the World Cup Finals, Liensberger overtook first-run leader Mikaela Shiffrin with a free-flowing final run, beating the American by 0.72 seconds.

“I felt like flying, it was a flight from top to bottom,” Liensberger said. “I just gave it all. That’s really amazing. If there’s something you love and you put all your energy in it, you can really achieve it.”

Shiffrin, who turned 26 on Saturday, was chasing her 70th career win. She led Liensberger by 0.19 after the opening run, but had lost her advantage by the second split of her final run.

“I knew Liensberger would be pushing very hard,” Shiffrin said. “I tried to push and kind of keep up with the pace, so I can take some good things from it.”

Discipline leader Petra Vlhova, who won Friday’s floodlit slalom on the same course, finished only in eighth following a big mistake in the Slovakian’s opening run.

The result re-opened the fight for the season-long slalom title, as Vlhova had her lead over Liensberger reduced to 22 points, with Shiffrin 37 behind in third. A race win is worth 100 points.

The last race is next Saturday in Lenzerheide, Switzerland.

“The only thing you can really expect is that it will be an exciting show," said Shiffrin, who finished third in Friday's slalom after she just avoided skiing out following a mistake.

“Kathi and Petra are both very strong," the American said. "I am not totally out of the fight, which is, after yesterday, a little bit of a surprise.”

Vlhova won the title last season, dethroning six-time winner Shiffrin as the American was taking a break from racing following the death of her father.

On Saturday, Vlhova finished the first run 2.95 seconds behind in 27th place, with only the top 30 being allowed to start in the second run.

Vlhova lost her balance after the fifth gate and needed an acrobatic recovery with her left leg up in the air to correctly pass the next gate. She was already 1.97 seconds behind Shiffrin at the first split.

Realistically out of contention for the race win, Vlhova still posted the fastest time in the final run and climbed 19 places.

“I was thinking: OK, nothing to lose, I take a lot of points or I take zero points. So I took a lot of risks,” Vlhova said.

However, Liensberger did win gold in slalom at the world championships three weeks ago.

“It's really incredible for me, but I know what I did for it,” said Liensberger, who missed a slalom podium only once this season.

"I just did my job today and it was good enough. To win my first World Cup race here in Åre is wonderful.”

Liensberger's winning run Saturday resembled the way she beat Shiffrin and Vlhova in both legs for her dominating victory at the worlds.

Liensberger’s win also marked the first victory for Austria in any women’s World Cup race this season. The team never had a full season without a victory in the World Cup, which started in 1967.

Another Swiss skier, Mélanie Meillard, tested positive for COVID-19 after competing in Friday’s race and was quarantining.

Her teammates were cleared to start Saturday after their tests in the early morning hours came back negative.