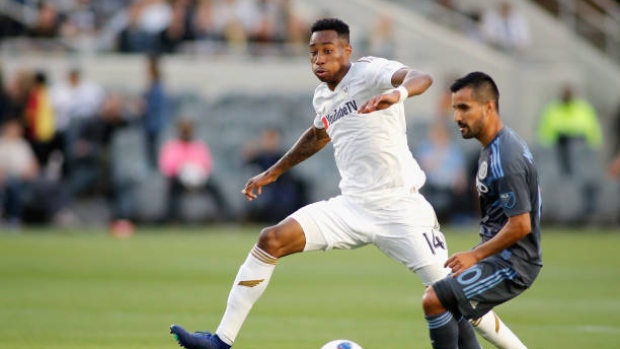 It was September 2018 when Canadian international Mark-Anthony Kaye was supposed to be playing against his former team, Toronto FC.

It was a match he looked for as soon as Los Angeles FC’s 2018 schedule was released. When he became an integral part of their midfield in the expansion club’s first-ever season in Major League Soccer, he started to mentally prepare himself for a game he still wasn’t sure he was ready for.

Ready or not, the decision was made for him before he could find out for himself. A broken ankle cruelly ended his season in the middle of the MLS summer and in the middle of a breakout year for the former TFC academy product. Suddenly he had more than separation wounds from his hometown club to repair.

Following surgery, Kaye started rehabilitation for the ankle as well as the mind, having now become accustomed to using a setback to reflect. With the benefit of time he has found more clarity, allowing him to understand that a first meeting with his former employers is better this year than last.

“Last year I wasn’t ready mentally to deal with that. Who knows what would have happened if I had gone to BMO [Field]? But now they are coming to me. It will be exciting. They will meet me at my best and they arrive in good form for me to meet them at their best,” the midfielder told TSN.

Kaye’s story is as unique as it is inspiring for Canadian Soccer, but that’s certainly not how looked four years ago.

Released by TFC at the age of 20, he was just another talented young Canadian soccer player who, in the eyes of evaluators, had failed to make the necessary grade required to become a professional.

At that point he had a decision to make.

“Yes, I had a real opportunity to grow and break through in Toronto and it didn’t go my way,” Kaye said. “A lot of people had that or have been in that position and have fallen off the map and disappearing from the game. At that time, I really felt like that couldn’t happen now to me. I simply had to pick myself up, go somewhere else to keep going.”

That somewhere else was Louisville City of the United Soccer League (USL) where he says he “opened his eyes and changed the way he thinks to become stronger mentally.”

“People think that athletes have one step to fame but there is a lot of stuff behind the scenes that you don’t see that makes us who we are,” he said. “My time in the USL humbled me and made me value the game more.”

He also learned how to become a winner, helping Louisville City win the 2017 USL Cup Final to cap off a season that had ensured crucial eyes from MLS were watching him again.

Bob Bradley and LAFC had done their homework. They no longer saw just the profile of a left winger, but also a smart runner operating in space who received balls well and created terrific angles in and out of possession with his left foot.

Bradley saw a future box-to-box midfielder and as soon as he got to know the well-spoken and intelligent Kaye. He understood how smart and open Kaye was to new ideas and the American boss felt that would help him evolve into a starting midfielder in MLS.

“Bob set a simple plan for me to be open to ideas, come every day to learn and enjoy it,” Kaye said. “I went into last season not knowing how much I would play, but it went perfectly as I got to make an impact on every game. For me, it was a case of no ego; put it all aside because I want to play.”

Kaye was the model student, taking everything in while never forgetting the moment he left Toronto and wondered if he would get another shot. He thrived under a deep-thinking coach and embraced the high level of football intelligence he was being taught every day.

“The way we play it requires a lot of tactical understanding that I think my mentality was suited for,” Kaye said. “I saw that as something I could take an advantage of over other players battling for a starting spot. “

After he broke his ankle, Kaye saw as an opportunity to work even harder on the mental side of the game.

“When I was out it helped me see the game from a different perspective and realize that it’s a lot about thinking,” he said. “You have to be smart to get to the top level; it’s not just about your physical attributes, which North American soccer has been based on for a long time. I am a better player who thinks more because of it. ”

Kaye’s work paid off. He is now a vital member of Canada’s midfield after two more impressive performances against Cuba, an MLS all-star and a crucial part of arguably the finest team to ever play in this league.

He understands that the team must beat their despised rivals, LA Galaxy, and win an MLS Cup soon to meet their own collective standards. He also recognizes that the 2019 season has been one of remarkable consistency, played at a ferocious pace with a high technical quality with and without the ball that we haven’t seen before at this level.

It helps, of course, to have the league’s best player in Carlos Vela on your side. It’s the likes of Vela at his peak that is elevating the overall quality of the league because of the impact he has on others to be better.

“Carlos has been unbelievable,” says Kaye struggling to find a better adjective. “He pushes you to get to the next level, which everyone knows you can get to.”

Vela, Kaye and their LAFC side take on Toronto FC this Saturday knowing eight points from their final four games will give them 72 points and the title of finest ever team in a regular MLS season.

That remains Kaye’s primary focus. Although he is eager to finally meet Toronto FC, it’s no longer a matchup that comes with any negative emotions.

“I don’t need to prove anything to them anymore,” he said. “In two years I have established myself as one of the top midfielders in the league – they had an opportunity to keep me and they didn’t want and that’s fine so I don’t worry about that.”

He no longer needs to. It was once a heartbreaking moment for him, but Kaye refused to be defined by it and instead found a different way.

“Being let go from Toronto was eye-opening and once it happened I reshifted everything. I started from ground zero with my talent, matured quickly and then worked on my mentality, which was that I wasn’t going to take no for an answer,” he said.

“I look back at that time now and laugh because I came out on top. Setbacks are good because it forces you to become stronger than you were.”