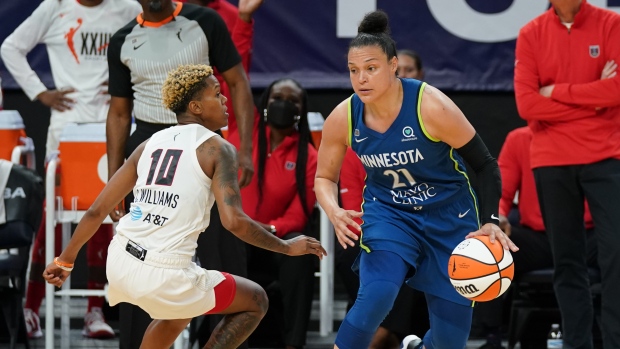 PHOENIX -- — Kayla McBride scored a season-high 26 points, Sylvia Fowles and Napheesa Collier each had a double-double and the Minnesota Lynx beat the Phoenix Mercury 82-76 on Wednesday night.

McBride made 9 of 12 from the field, including 5 of 6 from 3-point range. Collier finished with 19 points and 11 rebounds and Fowles, who was 7-of-11 shooting, scored 15 points and grabbed 11 rebounds. Layshia Clarendon added 12 points for Minnesota (8-7).

Brianna Turner hit a jumper to trim the Mercury's deficit to 78-74 with 1:03 left but, after a miss on the other end by Fowles, Clarendon grabbed an offensive rebound and, after a timeout, hit a pull-up jumper Phoenix (7-8) got no closer.

Brittney Griner led the Mercury with 28 points, Skylar Diggins-Smith scored 16 and Diana Taurasi 10. Griner was 12-of-15 shooting but the rest of the Phoenix players combined to shoot just 32% (17 of 53) from the field.

The Lynx, who opened the season with four consecutive losses, have won three straight to move above .500 for the first time this season.