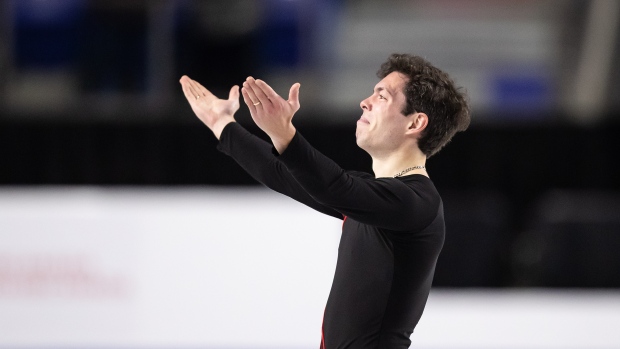 BEIJING — Before he stepped off the Olympic practice rink on Monday, Keegan Messing looked up to the ceiling and breathed out what looked like a big sigh of relief.

The Canadian men's figure skating champion practised in Beijing on Monday afternoon, just five hours after landing and less than 24 hours before he'll skate in the men's short program.

He passed his arrival COVID-19 test and jumped on the bus to practice with only minutes to spare.

The 30-year-old from Girdwood, Alaska, was detained in Vancouver for more than a week after testing positive for COVID-19. He had to pass four tests before being permitted to fly to Beijing.

According to @KeeganMOnline, Messing's official Twitter account, his mom Sally watched the live feed of the practice.

Canada's charter flights to Beijing were long gone by then, so Messing, who captured his first Canadian title last month in Ottawa, had to fly first to Montreal for his fourth test, and then through Milan to Beijing.

Skate Canada high performance director Mike Slipchuk had joked if there was any athlete capable of competing well after taking the "milk run" to Beijing it was Messing, since his travel from Alaska is long for any event.

"Everywhere (Messing) goes is a two-day adventure," said Slipchuk. "But Keegan and his coach Ralph (Burghart), they’re very low key and they’re determined to be here."

He competes for Canada because his mom was born in Edmonton.

Messing's positive COVID-19 test meant he missed the team event, in which Canada finished fourth on Monday. Roman Sadovsky, the Canadian silver medallist, filled in for the men's singles skates. Messing spent the first few days in Vancouver running up and down the hotel stairwell, with a security guard keeping watch, and then was given private ice time in Vancouver to practise.

This report by The Canadian Press was first published Feb. 7, 2022.