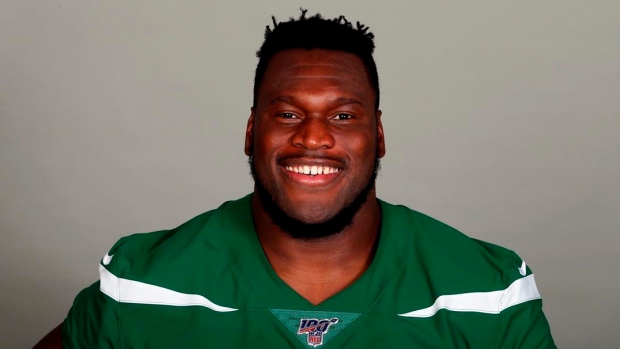 FLORHAM PARK, N.J. — Kelechi Osemele is having surgery on his injured right shoulder — whether or not the New York Jets approve it.

The veteran left guard and the team are in a standoff in which Osemele says he needs the season-ending operation now and is waiting for the team to authorize the procedure on his torn labrum. The Jets, however, believe he can hold off and play through the injury.

"I'm just getting it done myself," Osemele said Wednesday after he sat out practice.

He said he flew to Boston on Tuesday to receive a third medical opinion and was examined by orthopedic surgeon Dr. Glen Ross, who informed him that his shoulder injury is "pretty bad."

"It's torn off the bone," Osemele said, adding that Ross recommended he have the surgery immediately. Osemele told general manager Joe Douglas on Tuesday that he would be going forward with the operation.

"He was upset," Osemele said.

On Wednesday night, Osemele posted a photo of his doctor's report from Ross on Instagram. Ross says Osemele "should undergo a right shoulder arthroscopy, labral repair and cyst debridement. Kelechi has a posterior/inferior labral tear and a large cyst." Osemele added a note to Jets fans, saying he I wants them to know "that I want to be out there playing but I am truly unable to at this time."

Osemele said the team doctor recommended he could play through the injury with pain-killers and a brace, and an independent doctor in California — through a review of the MRI, after initially being sent a blank one by the Jets by accident — recommended surgery only if the symptoms dictated it. A person with direct knowledge of the situation told The Associated Press last Friday that both doctors determined it is a pre-existing injury and cleared Osemele to continue playing through it — and hold off on the surgery.

The Jets have been fining Osemele for conduct detrimental to the team for not practicing after missing Saturday and now Wednesday's sessions. Osemele said he is being docked the maximum allowed under the collective bargaining agreement: $579,000 per week, which is the amount of his game checks.

Osemele said he and his agents have filed a grievance against the Jets, and had a conference call Monday with the NFLPA to discuss the situation. He also believes he'll get the money he is being fined back eventually.

"Pretty confident, considering that legally, the rules are if I can't practice and I'm injured, they have to pay me," he said. "That's how it works. I'm having surgery on Friday, so I can't play. I can't do anything about it."

The Jets haven't commented publicly on the situation.

Osemele's agent, Andrew Kessler, told the AP on Saturday he and his client "will respond accordingly and continue to do everything the right way."

Osemele, who is working out at the facility, said the Jets were sent the full doctor's report Wednesday morning and he and his representatives were waiting for the team to respond.

"They have been co-operative," Osemele acknowledged. "They sent the worker's compensation forms that I needed to get the surgery, so things are moving forward and I think they're doing their best to do the right thing. Now that they've done that, it's really their decision to choose to authorize it or not.

At the heart of the conflict is the issue of pain, in that if he can bear it and can play through it with the aid of painkillers, he's OK to play.

The two-time Pro Bowl selection was acquired from Oakland in March and said he was never told he had an existing injury. He said he first felt pain in the shoulder on Aug. 5 during training camp with the Jets and re-injured the shoulder at New England on Sept. 22. Osemele said he was receiving treatments on the shoulder during the first three weeks of the season and taking anti-inflammatory prescription drugs, but did not appear on the Jets' injury reports with a shoulder ailment during that time.

"I was taking Toridal until I just couldn't anymore," Osemele said. "The last game, it wore out at halftime and I went as long as I could on painkillers that were masking the pain. Now it's at the point where I can't do anything about it."

Osemele hasn't played or practiced since. Alex Lewis has started at left guard in his place the last three games.

There has been some speculation that Osemele made his initial decision to have surgery when he was potentially being benched in favour of Lewis.

"Absolutely not," Osemele said. "The decision was made before that even happened."

Osemele said the way things are being handled by the Jets is "ethically and morally wrong." He added that he believes "absolutely, 100%" he will be cut by the team in the off-season.

He said his teammates have shown him support throughout.

"It's been difficult," Osemele said. "You work your ass off and you think that there's good faith. I'm trying my best to do my pre-hab work and show up every day and be at meetings and do everything I need to do and control everything I can control. I'd be lying if I said that it wasn't frustrating to be in this position considering what I've been able to accomplish in this league and the type of player that I am, to be dealing with something like this is slightly disrespectful.

"But, it's outside of my control and I'm trying to be positive about it."