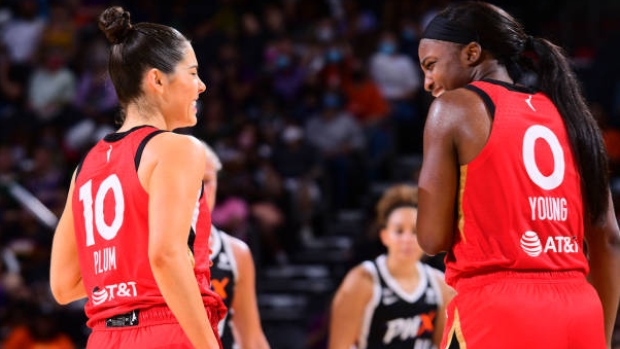 PHOENIX -- — Kelsey Plum scored 23 points, Jackie Young scored on a putback with 4.3 seconds left and Ji-Su Park blocked a final shot as the Las Vegas Aces defeated the Phoenix Mercury 84-83 on Sunday in a regular-season finale.

The Aces welcomed back center Liz Cambage, who had been out since Aug. 28 with COVID-19. She had four points and four rebounds in about 9 1/2 minutes of play.

Plum scored 13 straight Las Vegas points, and the last seven in the game to pull the Aces within 83-82 with just less than a minute to play. After a Phoenix miss, Plum missed a shot for the lead but Destiny Slocum hustled the offensive rebound. Plum drove again and her shot rimmed out, leaving a wide-open Young to put in the winner.

Brianna Turner drove to the rim for the Mercury as time ran out but her short floater was blocked by Park.

The game had no playoff implications. Las Vegas (24-8) is the No. 2 seed and has a double-bye and nine days off before playing the highest remaining seed in the semifinals. Phoenix (19-13), the five seed, is home against the eight seed on Thursday.

Las Vegas had balanced scoring behind Plum with Riquna Williams scoring 13 points and Chelsea Gray and Dearica Hamby adding 12 each but most of the key players were out down the stretch.

The Mercury also sat MVP candidate Britney Griner in the second half and were without Diana Taurasi, who remains out with an ankle injury. Skylar Diggins-Smith led the way with 17 points and Kia Nurse had 13, the pair combining for seven of 14 3-pointers, which matched a Mercury season high.