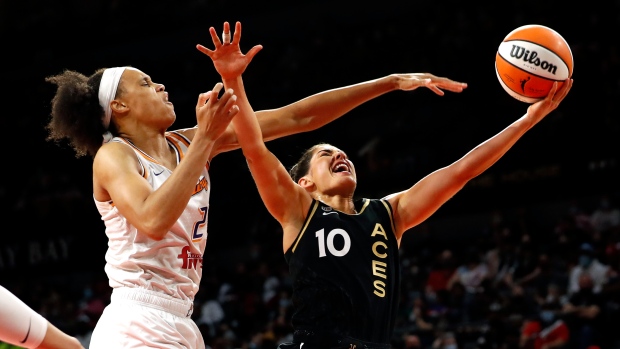 LAS VEGAS (AP) -- Kelsey Plum scored 20 of her 25 points in the second half, and the Las Vegas Aces beat the Phoenix Mercury 96-90 on Tuesday night in Game 1 of the WNBA semifinals.

Plum, the fourth-year guard who won an Olympic gold medal in 3-on-3 basketball, had 12 points in the third quarter as Las Vegas pushed its lead into double digits.

Riquna Williams scored 24 points for the Aces, who will host Game 2 on Thursday.

Phoenix, which won single-elimination games against the New York Liberty and defending champion Seattle Storm to reach the semis, led 30-21 after the first quarter.

Brittney Griner had 24 points, seven rebounds and six assists for Phoenix. Diana Taurasi, playing in her second game since returning to the lineup after sustaining a sprained ankle, scored 20 points on 6-of-17 shooting.

Williams scored 14 points in the opening 10 minutes to keep it close.