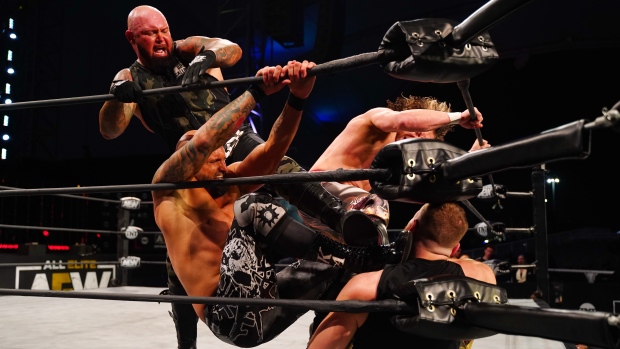 Kenny Omega and the Good Brothers beat down Jon Moxley , All Elite Wrestling

AEW World Champion "The Cleaner" Kenny Omega and Jon Moxley will do battle once again in the main event of Beach Break, Wednesday night on AEW Dynamite. Omega teams with the Good Brothers ("Machine Gun" Karl Anderson and Doc Gallows) to take on Moxley and Death Triangle ("The Bastard" PAC and Rey Fenix) in a six-man main event.

You can catch AEW Beach Break LIVE on Wednesday night at 8pm et/5pm pt on TSN2, the TSN app, streaming on TSN Direct and on TSN.ca.

Six-man tag team match: AEW World Champion "The Cleaner" Kenny Omega (w/ Don Callis) and Impact World Tag Team Champions The Good Brothers ("Machine Gun" Karl Anderson and Doc Gallows) vs. Jon Moxley and Death Triangle ("The Bastard" PAC and Rey Fenix) -  The enmity between Kenny Omega and Jon Moxley is still going strong now weeks after the former took the latter's AEW World Championship in December. This time, there are more belligerents in the battle with Omega recruiting his former Bullet Club stablemates Gallows and Anderson and Moxley introducing Omega's old rivals PAC and Rey Fenix to the proceedings. Last week's Dynamite ended with a wild brawl among the six men and Wednesday night's match has the same potential to go off the rails in a hurry. Death Triangle will have the extra motivation to bring to the match of avenging their compatriot Penta El Zero M, who was put on the shelf by an attack from Omega, Gallows and Anderson. The match could also go a long way to determine Omega's next title challenger. He does not currently have an opponent lined up for March 7's Revolution. Should Moxley, PAC or Fenix pin Omega on Wednesday night, might that be enough to put that man in the conversation for a title shot?

Tag team battle royal for a shot at the AEW World Tag Team Championship at Revolution: AEW World Tag Team Champions The Young Bucks (Nick Jackson and Matt Jackson), Private Party (Isiah Kassidy and Marq Quen) Dark Order (John "4" Silver and Alex "3" Reynolds), Inner Circle ("Le Champion" Chris Jericho and Maxwell Jacob Friedman), Top Flight (Daunte Martin and Darius Martin), Dark Order (Evil Uno and Stu Grayson), Proud-N-Powerful (Santana and Ortiz), The Acclaimed) (Anthony Bowens and Max Caster), Jurassic Express (Jungle Boy and Luchasaurus) and Sammy Hager (Sammy Guevara and Jake Hager) - You're not reading that incorrectly - the Young Bucks are in a match to determine the No. 1 contenders to the titles they already have. So why? Well, if Nick Jackson and Matt Jackson are victorious in this match, then they get to choose their opponents themselves for their pay-per-view title defence. On last week's Dynamite, the Bucks suggested that perhaps the Good Brothers might be their preferred opponents in that match. But before they can even entertain that possibility, they'll have to defeat the other teams looking to take their gold. One team not in this match is FTR (Dax Harwood and Cash Wheeler). The former champions were removed from this match by AEW management for their attack on Jurassic Express on last week's show and replaced by a second Dark Order team in Reynolds and Silver. The presence of multiple teams from the same faction in this match also creates interesting possibilities. We saw Chris Jericho and MJF win a three-way match to become Inner Circle's team to challenge for the titles only a few weeks ago, so what happens should Santana and Ortiz or Guevara and Hager win the battle royal? The potential for things to get very interesting with this battle royal is high.

Dr. Britt Baker (w/ Rebel) vs. Thunder Rosa - The former NWA Women's World Champion will finally get her shot at the good doctor after weeks of Baker being a thorn in Thunder Rosa's side. It was Baker who attacked Thunder Rosa during her rematch against Serena Deeb, the woman who took her NWA title, last November and prevented Rosa from becoming the first two-time NWA women's champ in a decade. Baker's hatred for Rosa stems from her belief that Thunder Rosa doesn't belong in AEW and she plans to do whatever she can to remove her from it. But this has only fueled Thunder Rosa's desire to get her hands on Baker. This match could also have title implications at Revolution. Like Kenny Omega, AEW Women's World Champion Hikaru Shida does not have an opponent for the PPV as of yet. A statement win by either woman on Wednesday night could put Baker or Rosa in line for a shot at Shida.

Lumberjack match: "The Murderhawk Monster" Lance Archer (w/ Jake "The Snake" Roberts) vs. Eddie Kingston - At the beginning of last week's match between these two men, Lance Archer sent his advisor Jake Roberts to the back because he wanted to handle Eddie Kingston on his own. That decision proved to be Archer's undoing. As Archer and Kingston were in the ring - and with Archer seemingly in control of the match - Kingston's stablemates, The Butcher and The Blade, attacked Roberts and brought him out to the stage. The distraction allowed The Bunny to slip Kingston a pair of brass knuckles without referee Bryce Remsburg noticing and Kingston laid out Archer with the Backfist from the Future to claim an ill-gotten victory over his rival. On Wednesday night, things won't be so easy for Kingston in the rematch. Surround the ring will be lumberjacks to ensure that Kingston and Archer settle things inside of the ring. Can "The Mad King" make it two wins in a row or will Archer get his revenge?

"Hangman" Adam Page and Matt Hardy vs. Chaos Project (Luther and Serpentico) - Could Big Money Matt's stable of clients be growing? At the conclusion of Page's match on last week's Dynamite, Hardy approached the Hangman to let him know that he was there for him following an emotional few months for Page that have seen him leave The Elite, lose both the tag team titles and his partnership with Kenny Omega and reject the membership offer from the Dark Order. Since Private Party have employed Hardy as their manager, they've already become the No. 1 contenders to the Impact World Tag Team Championship and that kind of instant success is what Hardy will try to sell Page on with his services. Defeating Luther and Serpentico on Wednesday night and getting on the same page (pardon the pun) would go a long way for Hardy to sell Hangman on his vision.

- The wedding of "Superbad" Kip Sabian and "The Bad Girl" Penelope Ford has finally arrived. What kind of ceremony have "The Best Man" Miro and his butler Charles Taylor arranged? Taylor's contract with Miro ends with the wedding, so does the former and soon-to-be Chuckie T. have something planned once he becomes a free man again?