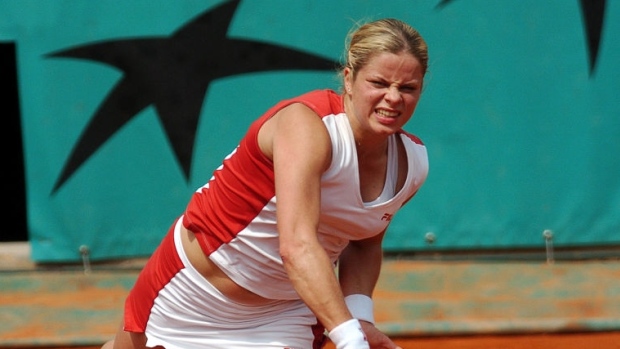 The 36-year-old Clijsters is making a second comeback — this time after more than seven years away from professional tennis — but was broken in the opening game against Muguruza, a fellow former No. 1.

Muguruza broke again for a 5-2 lead and was two breaks up at 3-0 in the second set before Clijsters found her stride. The Belgian levelled the set at 4-4 but Muguruza then converted her second match point in the tiebreaker.

"I had a good feeling out there," Clijsters said. “Second set, I felt I was really in the match.”

The four-time Grand Slam champion announced in September that she was returning to the tour for a second time. She initially retired in 2007, got married and had the first of her three children. She returned about two years later and won her second and third U.S. Opens and an Australian Open. She retired again after the 2012 U.S. Open.

“I felt like for a while I was dominating some of the points," Clijsters said about her match. "I think that's a good feeling to have, knowing the way I started the first set and then the way I was able to get back into that second set, with the type of tennis I played, it's something that is the positive about this match. I'll take that with me for the next matches.”

Muguruza will play either Veronika Kudermetova or Dayana Yastremska in the next round.

"I think this is just special because I didn't know how (Clijsters was) going to play," Muguruza said. “I'm sure she's going to get better and better, for sure, give us a lot of trouble.”