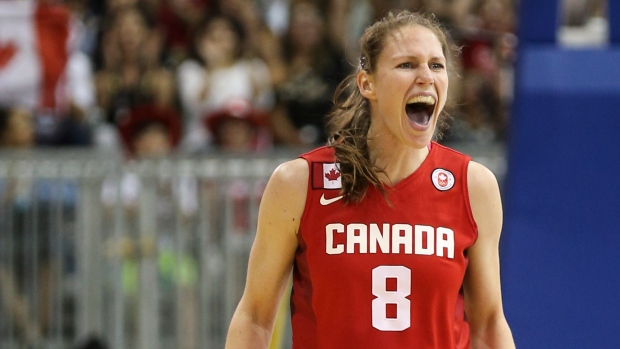 Canadian Olympian Kim Gaucher awoke to happy news Wednesday morning — baby Sophie is going to the Tokyo Olympics after all.

The International Olympic Committee says it will now allow breastfeeding moms to bring their children to Tokyo.

The news means Gaucher, a member of Canada's women's basketball team, will be able bring her three-month-old daughter Sophie to the Games.

"I'm just really happy. I’m just really happy that the right decisions have been made. Being a mom is really hard but it’s also one of the best jobs that I could have," Gaucher said Wednesday on a video call from Tampa, Fla., where the team is training at the Toronto Raptors' temporary training facility. COVID restrictions in Alberta prevented the team from centralizing at its usual home in Edmonton.

"To all of the working moms out there who’ve had to fight this fight before, I think it’s just a really good day for women in sport today."

The 37-year-old from Mission, B.C., made an emotional plea via Instagram earlier this month, saying the IOC was forcing her to make a tough choice: skip the Olympics, or spend 28 days in Tokyo without her daughter, who she is still breastfeeding.

"We very much welcome the fact that so many mothers are able to continue to compete at the highest level, including at the Olympic Games," the IOC said in a statement Wednesday. "We are very pleased to hear that the Tokyo 2020 organizing Committee has found a special solution regarding the entry to Japan for mothers who are breastfeeding and their young children."

The IOC had previously stipulated that no family could travel to Tokyo due to COVID-19 restrictions, but Gaucher pointed out that international media and sponsors can travel to Tokyo and a capped number of Japanese spectators will be allowed in venues.

"We've tried appeals. Everyone says they're on board, but nobody can do anything. Let's see if we can make a difference. It's 2021. Let's make working moms normal."

Tokyo will mark Gaucher's third Olympics and with Canada currently ranked No. 4 in the world, the veteran shooting guard has a shot at bringing home a medal.

"I wanted to be able to inspire not just future young Canadian basketball players, but my daughter Sophie, to be able to tell her that I gave it her all," she said.

Her teammates say Gaucher's presence will be a big boost for the team.

“Kim has given this program and the national team her blood, sweat and tears for a number of years now. And I know personally that we’re a better team whenever she’s on our team," said star guard Kia Nurse. “She was already a superhero in my eyes and now, as a working mom, she’s even more.”

Miranda Ayim said the squad simply wouldn't be the same without Gaucher.

"She’s been a leader with the team for so long. Her position and her role her is vital to our success, I believe," said the veteran forward.

"I would hope that by 2021 this wouldn’t be an issue. I thought we would be past this," she said. "But I’m very thrilled for her and for Sophie and her family that she’ll be able bring her newborn baby along and compete and play a sport she absolutely loves."

With less than a month to go before the Games begin, Gaucher said on Wednesday that she was beginning to feel OK about leaving her baby at home, and was going through the logistics with friends and family.

Having to make those plans came with some frustration, she said.

"But I think women’s sport is evolving and sometimes it just takes a little bit of time for everyone to get on the same page," she said. "And I’m just happy today that this decision has been made, the right decision for women in sport has been made and we can move forward."

The Canadian Olympic Committee and Canada Basketball said in a joint statement last week that they "recognize how difficult this situation is.

"In any other Games scenario, we would have long ago found a solution. The Tokyo Olympic Games are understandably being conducted with an unprecedented focus on health and safety, this includes Japanese borders being closed to overseas visitors, family and friends."

Chief executive officer and secretary general David Shoemaker said in a statement the Canadian Olympic Committee was "pleased to hear that Tokyo 2020 approved our request to allow nursing mothers to have their children at the Games."

"We recognize the enormous pressure Tokyo 2020 is under to keep the people of Japan and Games participants safe," he added. "The pandemic has complicated every aspect of the Games, and ensuring nursing mothers are able to compete and take care of their children is not an issue at a normal Games."