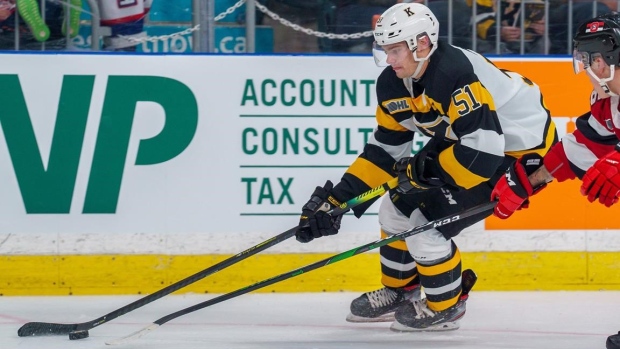 Shane Wright didn't need much time to prove he belongs in the Ontario Hockey League.

Wright — who was granted exceptional-player status last April after dominating midget triple-A and entered the 2019-20 OHL season as a 15-year-old skater, a year earlier than normal — has more than held his own against players as old as 21.

The native of Burlington, Ont., is averaging over a point per game (1.05) in his first year with the Kingston Frontenacs and also has been named an alternate captain.

"There's no reason to think they made the wrong decision granting him status. He's a good young man and we're thrilled to have him here in Kingston," added Frontenacs general manager Darren Keily. "When you talk to Shane, you sometimes think you're having a coffee with a 40-year-old man. He's just so mature, he's focused and passionate and knows where he wants to get to."

The rebuilding Frontenacs, who finished last in 2018-19 to get the right to select Wright No. 1 in the OHL draft, had a slow start to the season with just one victory in their first 16 games. But the fifth player to ever be granted exceptional-player status in the OHL has emerged from the early-season jitters and is leading his team and all rookies with 25 goals and 42 points in 40 contests.

In early November, Wright left the Frontenacs for a week to play in the World Under-17 Hockey Challenge. Canada had 60 skaters split into three squads represented at the eight-team international tournament, and it was Wright who produced the most points amongst all the Canadian talent with four goals and seven points in five games in Medicine Hat, Alta., and Swift Current, Sask.

Wright considered the event a major confidence boost and upon his return to Kingston proved as much with an 11-game point streak to solidify his presence in the league.

The five-foot-11, 180-pound centre is on pace right now to outproduce a 15-year-old Connor McDavid (1.04), the last player to be granted exceptional-player status in 2012-13, and is just behind John Tavares (1.18), who was the first player to be allowed in the league at 15 with the exceptional label in 2005-06, leading to some in hockey circles calling it "The Tavares Rule."

"Obviously everyone wants to score and get points and I'm the same," said Wright. "I just try not to focus too much on the (scoring) standings, who's ahead or behind me. Not really a priority of mine right now.

"As a team we want to make the playoffs. Even if we make the first round and get eliminated, just the experience of one round will help us a ton. I just want to keep making myself better."

Wright, who is eligible for the 2022 NHL draft, dominated minor hockey before making the jump to major junior.

He spent the 2018-19 season with the Greater Toronto Hockey League's Don Mills Flyers and was made eligible for the OHL by Hockey Canada and the Ontario Hockey Federation after producing 66 goals and 150 points in 72 games. His team won the league championship on an overtime goal he set up, while dropping just one game all season.

Losing isn't something Wright's used to and so far it is the biggest challenge tossed his way since moving up.

"I haven't been on a team that's been at the bottom of the standings. It's been different but it's good for me learning how to play from behind in games," said Wright. "Nothing wrong with building up that mental strength."

Early scouting reports suggest that the right-handed centre could be the No. 1 NHL pick in 2022, like Tavares and McDavid before him. And being part of a rebuilding team right now should only help prepare him for when an NHL team going through an overhaul calls his name.

"That's something we've talked to him about before. This probably isn't the last rebuild he's going to be going through. He's embraced it and there hasn't been any issues," said Keily.

"He obviously hates losing and I think that's the biggest adjustment he's had to make this year. The message we've tried to pass on is it may not always be fun, but it's part of the process and will pay dividends."

Wright's on-ice fundamentals — especially his shot — are top notch and everyone that knows him speaks of his maturity level. But it's his sense of knowing something before the rest of the players do that has him excelling so quickly in the OHL.

"He has that ability that you can't teach," said Keily.

Forward Joe Veleno is the one skater to be awarded the status in the Quebec Major Junior Hockey League and the Western Hockey league has never given it to a 15-year-old.

Heading into Thursday night's OHL action, the Frontenacs sat seven points out of a playoff spot with 24 games left.

This report was first published by The Canadian Press on Jan. 30, 2020.